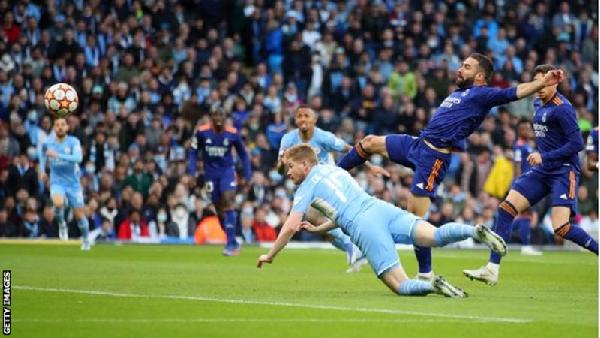 Manchester City will attempt to reach a second successive Champions League final on Wednesday with the away leg of their semi-final against Real Madrid - after one of the best games in the tournament's history in the first leg.

City, who lost 1-0 to Chelsea in last year's final, hold a narrow advantage after a 4-3 victory at Etihad Stadium.

Real have been European champions 13 times and won La Liga at the weekend.

The winners will play Liverpool in the final in Paris on May 28.

In an incredible first leg, goals from Kevin de Bruyne and Gabriel Jesus gave City, aiming to become European champions for the first time, a 2-0 lead after 11 minutes before Karim Benzema pulled one back after 33 minutes.

Phil Foden took City 3-1 ahead early in the second half only for Vinicius Jr to score two minutes later.

"It was a lovely open game," said City boss Pep Guardiola. "We were happy, it could have been better but also a lot worse."

Walker in, Stones out for City

England defender Kyle Walker could return after missing City's past five matches because of an ankle injury.

Walker is back in training and Guardiola confirmed he will travel to Spain, with a late decision to be made, although fellow defender John Stones remains sidelined after he sustained an injury during the first leg.

Joao Cancelo is also available after missing the game in Manchester through suspension and City will be pleased to have more options at right-back after 36-year-old Fernandinho had to cover there following Stones' injury. The veteran Brazilian struggled against the pace of 21-year-old Vinicius Jr, who sprinted away from him to score the Spanish side's second goal.

For Real, defender David Alaba is injured but midfielder Casemiro returns - a major boost as they look to tighten up in midfield against City's potent creative players.

Is this the year for City to become European champions?

City are one point clear of Liverpool at the top of the Premier League table with four games to go and will claim their sixth title in 11 seasons - and fourth under Guardiola - if they win all their matches.

But the Champions League is the competition the club have long set their sights on winning.

Guardiola, a European Cup winner with Barcelona as a player and two-time Champions League winner as Barca manager, will take City to a second successive final if they avoid defeat in the Bernabeu.

"To knock Madrid out you have to perform well in two games," added the Spaniard.

"It's going to be a massive test, we're lucky to be going there. We're both in the semi-finals of the Champions League, which is great, and hopefully we can give the best version of ourselves and get to the final.

"We have to prepare but we can play much, much worse than we played and still win. Nobody knows, football is unpredictable.

'We're very confident we can fight back and advance'

Since the first leg, Real have become Spanish champions, beating Espanyol 4-0 at home on Saturday to clinch a 35th La Liga title.

It also meant Carlo Ancelotti, who left Everton to return to Real last summer, became the first manager to win the title in each of Europe's biggest five leagues - England, France, Germany, Italy and Spain.

The Italian, like Guardiola a European Cup winner as a player and Champions League winner as a manager, has vowed to attack City from the start of the second leg. He said: "If we try to defend with a low block, with 10 men in our box, City will have 99 shots on target.

"Sometimes you need to take risks and we were very successful this season when risking because we have a lot of quality up front.

"It will be a clash of two very different teams, two teams with different qualities, collective and individual.

"But we'll have home advantage and we'll be aggressive as always. We have a quality up front that gives us the luxury to be daring on offence."

Former Tottenham midfielder Luka Modric, 36, will be aiming to reach his fifth Champions League final with Real and expects his team to overturn the one-goal deficit.

"Of course, we're very confident we can fight back and advance," said Modric. "We did not play well in the first leg and even so we scored three goals.

"The history of this club, winning this competition 13 times, will play a major part. It influences our mentality a lot because you believe you can achieve anything wearing these colours."