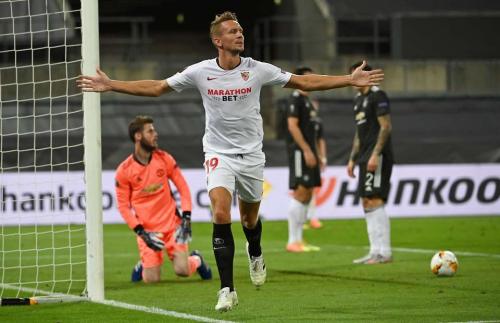 Manchester United have crashed out of the Europa League after a devastating 2-1 loss to Sevilla.

United took an early lead thanks to Bruno Fernandes' penalty.

Anthony Martial’s beautiful scoop pass put the ball into the path of Marcus Rashford who saw his shot saved by goalkeeper Yassine Bounou. However, in the process of shooting, Rashford was clattered by defender Diego Carlos and a spot-kick was given.

And you know the next bit too. Bruno Fernandes stepped up and we witnessed a return of his famous ‘hop’ as he stuck the ball into the top corner - United’s 22nd penalty of the season!

United led after just nine minutes but Sevilla just love the Europa League and they were never going to roll over.

And they were level just before the half hour mark. The Spanish side were wrongly awarded a throw-in but made United pay when Sergio Reguilon’s low cross was converted by former Liverpool player Suso at the back post.

After half time, Ole Gunnar Solskjaer's side had a quite ridiculous five or so minutes where they had countless opportunities to score.

However, just like earlier this week when they ran into Copenhagen goalkeeper, Karl-Johan Johnsson, in sensational form, Bounou in the Sevilla goal produced a masterclass.

But the longer the game went on, the more confident Sevilla grew. They frustrated the English side with their antics and produced the ultimate sucker punch with just 11 minutes remaining.

United looked tired as the match ticked toward the 90th minute and couldn't force the tie into extra-time. It means they've now gone three seasons without a trophy - their last was the Europa League back in 2017.