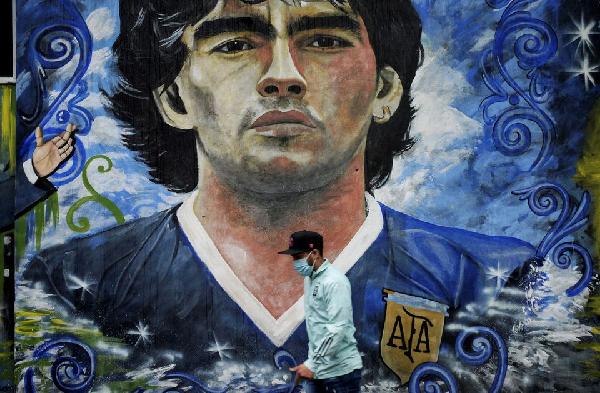 The shirt worn by Diego Maradona when he scored his infamous "Hand of God" goal against England at the 1986 World Cup is expected to sell for at least 4 million pounds ($5.23 million), auctioneer Sotherby's said on Wednesday.

The shirt is owned by former England midfielder Steve Hodge, who swapped shirts with Maradona after Argentina won the match 2-1 thanks to two goals by the forward, the second a solo effort considered to be one of the greatest ever scored.

It was Hodge's attempted back pass that Maradona chased before using his hand to push the ball past England goalkeeper Peter Shilton for the first goal. Following Maradona's death in 2020, Hodge said the shirt was not for sale.

Brazilian great Pele's jersey from the 1970 World Cup final is the most expensive soccer shirt sold at auction, according to Guinness World Records. It fetched 157,750 pounds in 2002, over three times the expected price.

Maradona, who led Argentina to World Cup glory in 1986, is widely considered one of the greatest ever footballers. He died at the age of 60 in 2020 due to a cardiac arrest.