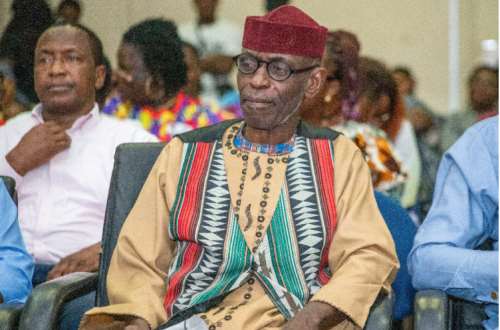 GFA President Kurt Okraku has said that Mohammed Polo will be part of the Black Stars entourage for the FIFA World Cup 2022 in Qatar.

Polo, who is a Ghana football legend was part of the team that won the 1978 Africa Cup of Nations (AFCON) with the Black Stars.

The former Hearts of Oak gaffer and legend has also contributed massively to the growth of football in the country.

According to Mr. Okraku, the association's way of showing appreciation to the legendary footballer for his immense contribution to the development of Ghana football.

"Mohammed Polo has come and done his bit, it is left with me and you to also do our part in our mission to make our dear nation great and strong," Kurt Okraku made this promise to the legend during the Launch of Polo’s autobiography titled "Polo The Magnificent: The story of the Dribbling Magician."

"Mohammed polo will be with us on the flight to Qatar which will be our token of appreciation. When you do your bit and sacrifice for our dear country, we will say thank you.

"His memories will continue to stay with countless generations of our dear nation and Africa at large,’’ he added.

Mohammed Polo made 54 appearances for the Black Stars from 1973 to 1985 and scored 20 goals for the Ghana national team.