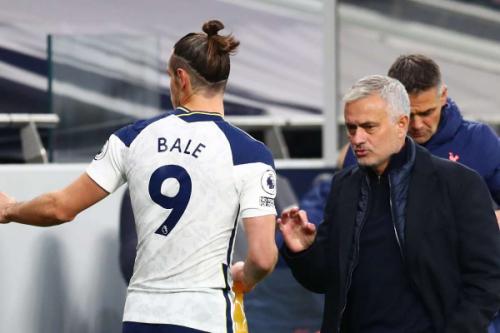 Jose Mourinho praised Gareth Bale's "personality" after his winning goal against Brighton and said he is looking forward to hearing how those in Madrid react to his match-winning display for Tottenham.

Bale's first Tottenham goal since re-joining Spurs on loan from La Liga champions Madrid in September sealed a 2-1 victory over Brighton on Sunday to move them up to second in the Premier League, two points behind leaders Liverpool.

Harry Kane had earlier scored his 149th top-flight goal from the penalty spot to move level with Les Ferdinand in 10th position on the all-time Premier League goals list, before Tariq Lamptey drew Graham Potter's side level shortly before the hour mark.

Spurs head coach Mourinho was delighted with the Wales international's all-round contribution and could not resist a dig at his parent club, whose boss Zinedine Zidane had a public falling out with Bale.

"For a week or so now, he's been improving," Mourinho told a media conference. "It's not just from watching him, the data supports that as well. We knew, Gareth knew. We share ideas and feelings.

"He deserves that [the goal]. When I have five minutes I'm going on Safari to look at the Madrid websites to see what they say about him.

"He showed great personality and had a great impact, scoring a very important goal for us. He also joined Harry in a very experienced way to play the last 15 minutes for us.

"They were very clever, very intelligent, especially at holding the ball up and bringing it into zones where they couldn't hurt us.

"He knows that we care about him and he cares about the club. I think he's a perfect fit. He's very calm, very intelligent. I'm very pleased for him to score the winning goal."

Bale has started just one game and made three substitute appearances since his return to north London as he slowly works his way back to full fitness.

Mourinho revealed he would start Thursday's Europa League game against Ludogorets, although he said the club will not rush him.

"He doesn't have 90 minutes in his legs yet," he added. "We are using the Europa League to get him minutes and when we can in the Premier League.

Lamptey's goal was given after referee Graham Scott undertook a lengthy pitch-side video review to assess if there had been a foul on Pierre-Emile Hojbjerg in the build-up.

Mourinho would not be drawn on whether he thought it was a foul, but believes referees should have to explain their decisions after a match.

"There are decisions that I think they should explain and not leave us in front of you [journalists] explaining things we don't have any explanations to," he said.

"I prefer not to talk about it. I see Scott as a good referee. He went to the screen and he saw what we saw on the bench. He should explain it but I know that is not going to happen."