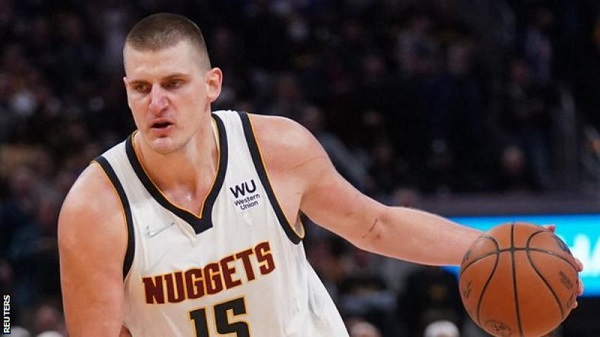 The Serbian beat Joel Embiid of the Philadelphia 76ers and Giannis Antetokounmpo of the Milwaukee Bucks.

Meanwhile, in the play-offs, the Bucks beat the Boston Celtics 110-107 to go 3-2 ahead in their best-of-seven Eastern Conference semi-final play-off.

And the Memphis Grizzlies thrashed the Golden State Warriors 134-95 to keep their series alive and now trail 3-2.

Desmond Bane, Jaren Jackson Jr. and Tyus Jones each scored 21 points for the Grizzlies as they produced the highest-scoring performance in their franchise's post-season history.

They achieved the win in the Western Conference play-offs without star point guard Ja Morant for the second game running because of a knee injury.

Over in Boston, Antetokounmpo scored 40 points as he dragged his side to victory. They trailed 93-79 with 10 minutes remaining but the reigning NBA Finals MVP made a series of clutch plays as the Bucks won the final quarter 33-21.

The Greek missed a free throw to draw the Bucks level at 107 apiece but team-mate Bobby Portis gathered the loose ball to score and put them a point ahead with 11 seconds remaining, and two more successful free throws closed out the win.

Jokic received 875 points from a global panel of 100 sportswriters and broadcasters in winning the MVP award.

With Embiid from Cameroon and Antetokounmpo from Greece, it is the first time that international players have filled the top three spots.

"I don't know what else you can say about Nikola at this point," said the Nuggets head coach Michael Malone.

"I've said it many times before, I'm extremely grateful to coach Nikola Jokic and just as grateful for the bond that we've built off the court in our seven years together."