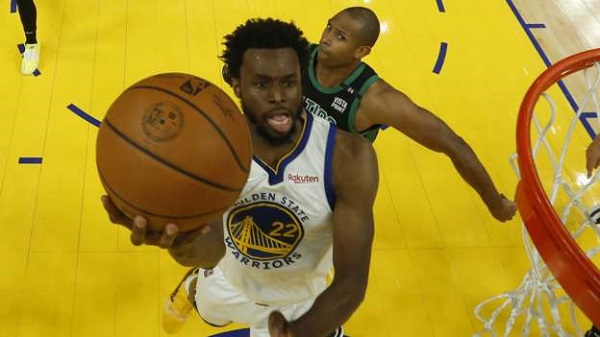 The Golden State Warriors are one win away from a seventh NBA title after Andrew Wiggins inspired his team to a 104-94 win over the Boston Celtics.

The Warriors lead the series 3-2 and can claim a fourth title in eight years with victory in game six of the best-of-seven contest in Boston on Thursday.

But Stephen Curry, who starred with 43 points in game four, missed all nine of his three-point attempts on Tuesday.

Curry had never before gone without a three-pointer in 133 career play-off games, but Warriors head coach Steve Kerr said the player was "probably due a game like this".

Wiggins' performance comes 36 years after his father, Mitchell, came off the bench to lead the Houston Rockets to victory against the same opponents in game five of the 1986 NBA Finals.

He added: "We're here and we're hungry. The team that wants it the most is going to get it, and we want it."

Jayson Tatum scored a game-high 27 points for the Celtics, who had led the series 2-1.

But, as was the case in their Eastern semi-final against the Milwaukee Bucks, they now require back-to-back wins to triumph.