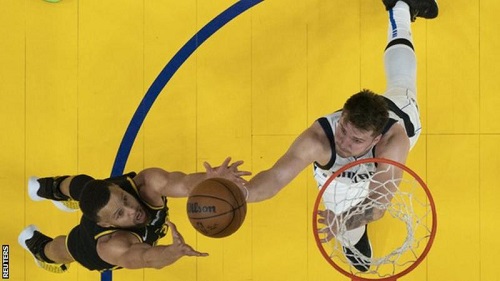 The Golden State Warriors fought back from 19 points down to beat the Dallas Mavericks 126-117 and go 2-0 up in the Western Conference play-off final.

Stephen Curry top scored for his side with 32 points, while six Golden State players finished in double figures.

Luka Doncic posted a game-high 42 points for the Mavericks.

"I told them that if we developed some poise in the second half that the game would come to us," said Warriors coach Steve Kerr.

The Mavericks led by 19 points at one point during the first half and were 72-58 up at the break on the road in California.

The visiting side made 15 of 21 three pointers in the first half but only six in the second half.

The Warriors, helped by outscoring their rivals 19-6 at the end of the third quarter, closed the gap to two before taking the lead at the start of the fourth quarter, and went on to take victory in a game in which Kevon Looney scored a career-high 21 points.

"I thought we were so scattered in the first half, maybe emotionally more than anything. Dallas came out and punched us," said Kerr.

"We just needed to get poised and get the game under control. We felt confident that if we did that, they wouldn't make 15 three-pointers in the second half. And that if they did, you just had to pat them on the back."

The Dallas Mavericks went 2-0 down to the Phoenix Suns in the last round of the play-offs before winning the best-of-seven series 4-3 and coach Jason Kidd hopes his side can learn the lessons from their latest defeat to launch another comeback.

"We have to understand, when we shoot three or four threes in a row and miss, you've got to get to the rim and got to get the ball into the paint," Kidd said.

"It happens. They held serve. We've seen this in Phoenix so now we have to go back and just focus on game three and get ready for game three, understanding what's at stake."

Game three of the best-of-seven series is on Sunday (01:30 BST Monday) in Dallas.

In the Eastern Conference finals, the Boston Celtics and the Miami Heat are tied at 1-1 and play the third match of their series on Saturday (01:30 BST Sunday).