Novak Djokovic 'so sorry' after testing positive for coronavirus 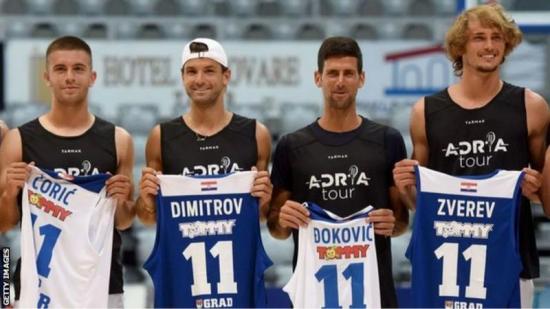 World number one Novak Djokovic said he is "so sorry" after becoming the latest tennis player to test positive for Covid-19.

Grigor Dimitrov, Borna Coric and Viktor Troicki all revealed they had coronavirus after playing at Djokovic's Adria Tour competition.

"I am so deeply sorry our tournament has caused harm," added Djokovic.

He said the tournament had been organised with "a pure heart", "good intentions" and a belief that they had "met all health protocols".

"We were wrong and it was too soon," Djokovic said.

The remaining Adria Tour events in Banja Luka and Sarajevo have now been cancelled Djokovic's brother Djordje, who is a director of the tournament, has confirmed.

"Unfortunately, due to all the events that happened in the last few days, we have decided that the most important thing right now is to stabilise the epidemiological situation, as well as for everyone to recover," he said.

Britain's Andy Murray said the positive tests were a "lesson for us", while Australian Nick Kyrgios called playing a "bone-headed decision".

A statement on Djokovic's website said: "Immediately upon his arrival in Belgrade [after the second event] Novak was tested along with all members of the family and the team with whom he was in Belgrade and Zadar. He is not showing any symptoms."

There have been no ATP Tour events since February because of the global pandemic and the Adria Tour, which is not an ATP Tour event, was one of the first competitions to be staged since then.

The first leg in Serbia attracted 4,000 fans, and players were later pictured dancing close together in a Belgrade nightclub.

With Croatia easing lockdown measures, players were not obliged to observe social distancing rules and were seen embracing at the net at the end of their matches.

Pictures on the tournament's social media site from Friday showed Dimitrov playing basketball with Djokovic, Alexander Zverev and Marin Cilic, while he also put his arm around Coric before their match.

Zverev, Cilic and Andrey Rublev, who also played in the Adria Tour, have tested negative, but suggested they will all now self-isolate for up to 14 days.

The ATP Tour season is set to restart on 14 August and the US Open will be held without fans from 31 August to 13 September, despite some players voicing concerns about travelling to New York.