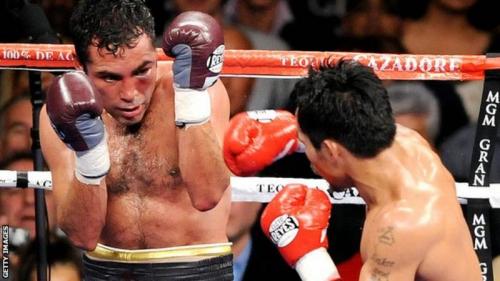 The 48-year-old held 11 titles across six weight divisions in a 16-year career and is regarded as one of the greatest pound-for-pound fighters.

His final fight was a defeat by Manny Pacquiao in 2008.

But at an event to promote Jake Paul's fight with Ben Askren in April, De La Hoya took to the stage to announce: "On 3 July, I'm making a fight comeback."

He then dropped his mic and left the stage.

American YouTube star Paul is fighting former UFC fighter Askren in the US city of Atlanta on 17 April.

Earlier this week, De La Hoya told DAZN he had been in training for some time. He also made reference to former world heavyweight champion Mike Tyson's recent comeback at the age of 54.

"Mike Tyson inspired the hell out of me," De La Hoya said.

It is not yet known who De La Hoya will face, but he has previously suggested a match-up with another American boxing great, Floyd Mayweather, would be "massive".