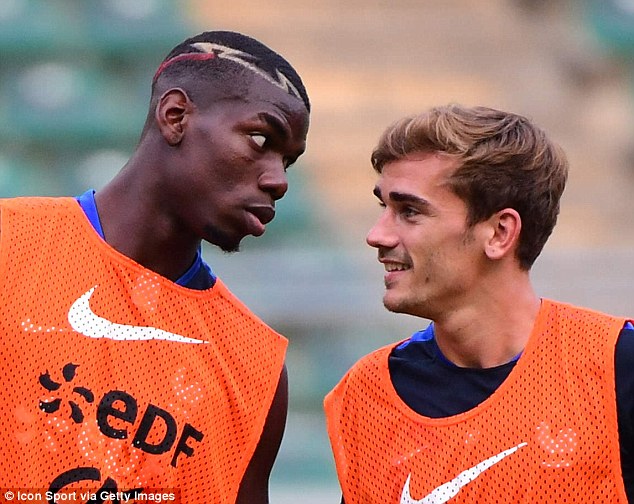 Paul Pogba has revealed his pride in close friend Antoine Griezmann's rise to the top of European football, as the striker continues to be linked with a big-money move to join him at Manchester United.

The pair have not been shy in complimenting each other publicly, with Griezmann previously insisting Pogba was a perfect signing for Manchester United. Now, after already breaking the world record to sign the midfielder, the Red Devils are keeping a close eye on Griezmann in preparation for a potential summer move to Old Trafford, which they know would cost them at least £60million.

In two-and-a-half seasons, Griezmann has gone from an under-the-radar Real Sociedad player to being one of the biggest names in European football, which has seen him reach major finals with Atletico Madrid and France, finish third in the Ballon d'Or voting and earn a nomination for FIFA's 'Best' awards.

His displays have attracted the attention of Europe's leading clubs, with United regularly checking his availability during a season where Atletico are stuttering but Griezmann is still producing.

'I'm very proud of him, I know what he's been through,' Pogba said in an interview published on the FIFA website.

'After that he kept working hard, and now he's one of the three nominees for The Best award. I'm very happy for him, especially to see a French player doing so well. You can see the French players are going back to the basics, like our predecessors.'

The qualities that Griezmann would bring to Jose Mourinho's side on the pitch are clear for all to see, but Pogba has revealed his friend is also a good influence on the training ground and in the dressing room.

'He's very clever and he plays with his body,' Pogba said. 'He's not that big, he's small, he's fast and agile and he scores goals. That makes him Griezmann, the very good player that he is.

'He's one of the funniest guys I've met and played with. He is someone who always has fun in training, he works hard but with pleasure, as a game. We have fun. He sometimes goes in goal, doing some amazing saves, other times he'll act like he's Didier Drogba, holding the ball up.'

Griezmann will vie with Cristiano Ronaldo and Lionel Messi for the FIFA award on January 9, as he bids to beat the two players who have had a stranglehold Europe's individual awards since 2008.

But Pogba believes their reign is not unbreakable, though, saying: 'Of course, there are other players who can do that.

'We have Zlatan (Ibrahimovic) at Manchester United. Even he could do it. He's 35 years old, but the way he's playing, the way he's scoring goals, you can see that he's been in the top level for more than 10 years.'

Pogba himself was named in the 23-man shortlist but revealed he would not be satisfied until he collects the award.

He said: 'I'm still far away. It's good to be in the top 10, five or three but that's not really what I'm about. If I'm in the top three, I want to be the number one - so that means I'm still very far away.'

One thing Griezmann does need to work on, according to Pogba, are his dance moves, although the United midfielder is impressed by his friend's 'Hotline Bling' goal celebration.

'He's got some moves but he won't show it!' Pogba said. 'He doesn't want me to say it, he's someone who doesn't want to show his skills. He's a good dancer for sure.

'His (celebration) was special because he was the only one to do it. But my dab was more powerful around the world than his. To be honest though, even I was doing his 'Hotline Bling'! I think that shows it's good.' Mail Online