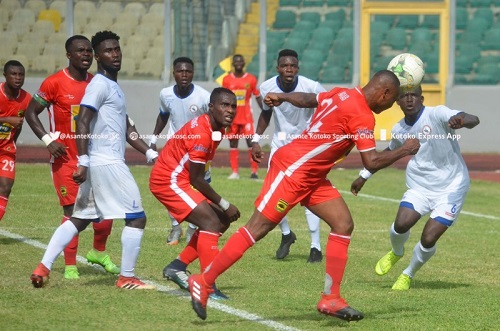 Berekum Chelsea will on Sunday play against Asante Kotoko in a Match Day two fixture at the Golden City Park.

The Blues snatched a point in their opening game against Legon Cities at the Accra Stadium having thrown away an early lead to settle 1-1 against the Royals. Asante Kotoko endured a nightmarish encounter against Eleven Wonders on Sunday, settling 1-1 against the Techiman based side.

Berekum Chelsea will hope to make a winning start at home, setting up a tough encounter at the dreaded Golden City Park. The Blues have in their team experienced players who have the capacity of changing games in difficult situations. They have in their squad, championship winning trio, Edward Kpodo, Jordan Opoku and Richard Kissi Boateng. The three players were part of the Chelsea squad that won the Ghana Premier League in 2012.

They also have in their ranks, Stephen Sarfo, Stephen Amankona and Kofi Owusu, players who played a key part in their campaign last season.

Kotoko Coach Maxwell Konadu is sweating on the fitness of some of his players, a situation he admits, affected their play against Techiman Eleven Wonders on Match Day One.

New recruits, Sulley Muniru, Fabio Gama and Patrick Asmah would need a few more weeks to gain full fitness but they still have some amazing talents in their set up. Kotoko's stand out player in last Sunday's game the Kotoko was goalkeeper Felix Annan. He took his spot very well when he was called upon to play ahead of Kwame Baah and much will depend on him in this encounter.

Emmanuel Keyekeh struggled for a larger part of the game against Wonders but the former Karela United player possess the quality to make a difference in the Asante Kotoko midfield. Kotoko lacked creativity in the opening game but the arrival of Christopher Nettey is a welcoming news for Coach Maxwell Konadu.

The former Attram De Visser right back missed the season opener because of national team duties with the Black Stars.

Kotoko haven’t been impressive in recent visits to Berekum. The Porcupine Warriors have won just two, lost three and drawn five in their last 10 meetings.