Preview: Karela United square off with Hearts of Oak at Aiyinase 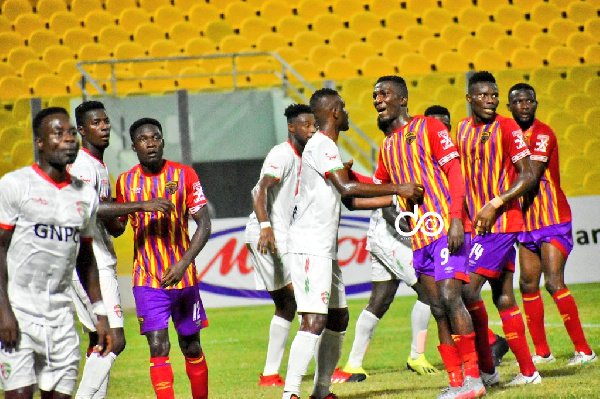 Karela United and Accra Hearts of Oak are expected to slug things out on match day 21 of the Ghana Premier League at the CAM Park on today.

The Aiyinase side fought for one point in Accra during the first round of the League – but aim for the three points this time after losing the top spot to Asante Kotoko. Karela United sat at the top of the League table for 10 weeks until the latter stages of the first round when Great Olympics overtook them.

They have lost only once in the League – a 2-0 loss to Asante Kotoko. Until the defeat to Asante Kotoko, Karela held an record three year unbeaten home run that stretched back to 2017. Coach Evans Adotey’s side began the second round of the League with a hard earned 1-1 draw against AshantiGold before losing to Inter Allies and Dreams FC at the theatre of Dreams, Dawu.

READ ALSO: Videos: Medeama rally from behind to beat Kotoko to go top

The competitions top scorer Diawusie Taylor (12 goals) has gone three games without scoring – dating back to March 6, 2021 when he scored a brace against Aduana Stars in a 2-1 win at the CAM Park. Karela United are in 5th place with 32 points after 20 matches in the League.

Accra Hearts of Oak beat Inter Allies 1-0 to move to third place in the standings with 33 points. The Phobians have won two and lost one in their last three outings and walks to enemies’ territory with the aim of picking the maximum points at stake.

Victor Aidoo missed a penalty against AshantiGold in a 1-0 loss at the Len Clay stadium – but has been the tormentor in chief for the former African Champions all season. The former Samartex forward is Hearts of Oak’s top scorer with 7 goals.

Coach Samuel Boadu is sweating on the fitness of Raddy Ovouka who hasn’t played since the International break due to injury. Also on the injury lists are Frederick Ansah Botchwey, Benjamin Afutu, Abdul Aziz Nurudeen and Abdoulrahmane Mamane Lawali.

Accra Hearts of Oak have scored 28 goals and conceded 15 after 20 matches in the season – won 2 and drawn 2 matches on the road.

The match will be played at the Crosby Awuah Memorial Park at Aiyinase at 3pm on Sunday. It will be broadcasted live