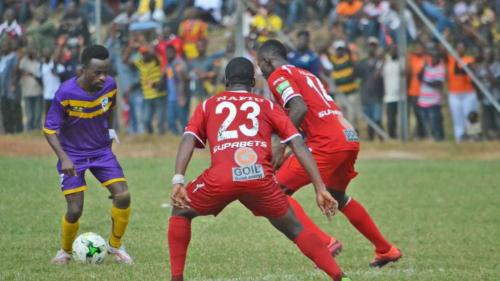 Medeama SC will on Sunday, lock horns with Asante Kotoko in their outstanding Premier League game at the Akoon park in Tarkwa.

The game was rescheduled because of Asante Kotoko’s participation in the Total CAF Champions League. This game will give the two teams an opportunity to right the wrongs as both sides aim to get their season back on track.

Medeama has won only once in the ongoing campaign (1-0) win against Ebusua Dwarfs in Cape Coast and many believe that the absence of Prince Opoku Agyemang and Nana Kwasi Babil is the reason for the club’s abysmal display thus far.

The two players who now ply their trade in South Africa and Austria respectively, combined to score sixteen goals for the mauves and yellows in the cancelled 2019/2020 season.

READ ALSO: Errea replicas will be ready next month - Kotoko CEO to fans

Medeama SC began the season with a home draw against Accra Olympics (1-1) and lost (2-1) to Dreams FC in their first two outings. They struggled to find the back of the net in a (0-0) stalemate against Legon Cities. But managed to beat Ebusua Dwarfs 1-0 before dropping points against Liberty Professionals in a (0-0) draw at home.

Coach Samuel Boadu needs to find the right balance on Sunday against Asante Kotoko. They look solid at back with goalkeeper Eric Ofori Antwi always on top of his game.

Daniel Egyin, Samuel Appiah, Ibrahim Yaro and Ali Ouatarra have over the years established themselves as pillars at the back and their effective combination with Justice Blay, Eric Kwakwa and Akwasi Donsu in midfield is ever refreshing. Blay, arguably the best player last season, will play against his former team following a botched move to the Porcupine Warriors.

In attack, the only experienced player is Agyenim Boateng, a striker who has yet to sparkle in the League, netting only once. But they have creativity in Kwadwo Asamoah, a man who lighted up the competition last season during his spell with Techiman Eleven Wonders. Aside their struggles, Medeama SC have yet to win a game at home this season after two attempts.

For Asante Kotoko, it will be a great time to fix their problems. They head into the game five days after losing one nil to Sudanese giants Al Hilal in the Total CAF Champions League.

The Porcupine Warriors have registered only one win in their last three games, losing two and winning one. Stop gap Coach Johnson Smith recorded a win at Dawu against Dreams FC but they were pegged back by Al Hilal on Wednesday.

Their lead striker Kwame Poku has gone four games without scoring and that would be a major worry for the technical team.

Osman Ibrahim who gave them the winner against Legon Cities has not shown consistency in the season. Patrick Asmah and Moro Ibrahim give them options at left back with Habib Mohammed, Yusif Mubarik, Ismael Ganiu and Wahab Adams competing for places in central defence.

Kotoko have lost midfielders Emmanuel Keyekeh and Mudasiru Salifu to injuries. But Latif Anabila, Kwame Adom Frimpong, Muniru Sulley and Godfred Asiamah have slotted in calmly for them.