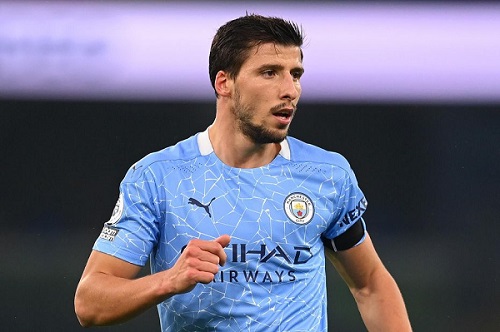 Ruben Dias has been named the Football Writers' Association Footballer of the Year.

The Manchester City defender has starred for Pep Guardiola's side since joining them in a Â£63 million move from Benfica in the summer.Â

Reflecting on his award, Dias said: "It's a huge privilege, I'm very, very happy. I could not have done it without the success of the team, without everyone in the team deserving this award. Only by that, as a defender, am I able to be here to receive this prize.
Â
"Essentially, when I came I wanted to meet everyone as fast as possible, understand how the team plays. I knew the manager and the players, I knew a bit about the philosophy of the club because I am fan of football and I know City from the last few years.

"I had an idea of what I was coming to and I wanted to integrate myself as fast as possible."

Dias is the first defender to win the award since Liverpool's Steve Nicol back in 1989. The 24-year-old believes his recognition ahead of his goalscoring team-mates is a reflection of the team's unity

"It means something because normally the ones who finish off the plays get the spotlight, but me receiving this award is a major example of our team," he explained.

"We work and build our game, it reflects the togetherness we have on the pitch. The spirit that runs through this team with these players, how we play like a family."
Â

What has Dias achieved for City?

Dias has been a crucial part of Pep Guardiola's side as they won the Premier League title back from Liverpool.

His presence in the first-team shored up a defence that had been leaky in the early part of the season. They have now conceded just 32 goals in 37 games.

The 24-year-old has also helped City reach the Champions League final for the first time in their history.

What is the FWA Footballer of the Year award?

It's an annual award that is given to the player who has had the best season in English football. It has a long history, stretching back to the 1947-48 campaign.

That season the award was given to legendary winger Stanley Matthews, who was playing for Blackpool.

The winner of the award is decided by members of the Football Writers' Association, a body of around 400 football journalists around England.

Dias is the 74th winner of the award.

Who are the significant recent winners?

Jordan Henderson won the award in the 2019-20 season after leading Liverpool to the Premier League title.

Raheem Sterling picked it up in 2018-19 after his contribution to City winning the league, while Mohamed Salah won it in 2017-18 after his stunning campaign in front of goal.