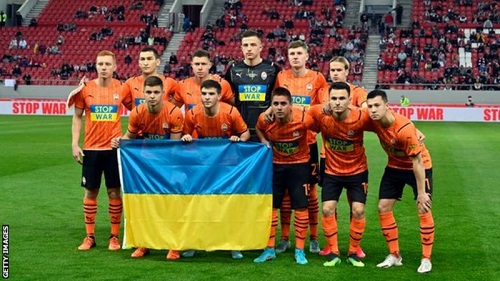 In June, football's world governing body ruled that foreign players in the country could suspend their contracts following Russia's invasion.

The club have appealed to the Court of Arbitration for Sport (CAS).

"We had to do this because of FIFA's highly unfair ruling," Shakhtar Donetsk chief executive Sergei Palkin told BBC Sport.

"The consequences mean we will continue to lose significant income from deals we expected to close.

"We would also like to highlight that given the situation Ukrainian clubs are facing with the war, there has been little respect shown towards these clubs by Fifa.

"FIFA has not looked to protect clubs and at no stage consulted with us to find a solution - they have seemingly ignored the perilous state that Ukrainian football clubs have been facing since the beginning of the war."

Shakhtar, regulars in the Champions League, argue they lost money on four players who left the club after the players' contracts were suspended following Fifa's ruling.

In a letter to CAS seen by the BBC, Palkin revealed: "Because of FIFA's decision, FC Shakhtar has lost a chance to transfer four foreign players for the total amount of about €50m.

"The players' agents advised them to withdraw from negotiations in order to leave the club without any compensation, which would allow them to secure more lucrative arrangements with new employers."

FIFA ruled on 21 June that, unless they reached an agreement with their club by 30 June, foreign players and coaches could suspend their contracts with Ukrainian clubs until 30 June 2023.

Shakhtar had 14 foreign players in their squad and intended to sell some of those players in order to raise funds to cover their loss of earnings.

Their revenue streams have been decimated by the Russian invasion and the 13-time Ukrainian champions had hoped to recoup money both to cover the club's losses and assist their humanitarian response to the war.

However, they said they had just over a week to finalise any deals with players before they could unilaterally suspend their contracts, and that meant buying clubs and agents therefore waited to avoid paying transfer fees.

In the letter to CAS, Shakhtar said midfielder Manor Solomon stopped his permanent transfer to Fulham because of the Fifa ruling, and Brazilian midfielder Mateus Cardoso Lemos Martins' scheduled move to Olympique Lyonnais also fell through.

Palkin previously criticised agents who he claimed were exploiting the war in Ukraine for their own benefit by 'stealing' players and asking for fees to be paid directly to them rather than the club itself.

"In absence of any reaction from FIFA, we will have no choice but to seek for damages compensation from the competent courts," added Palkin.

"I believe more meaningful support initiative to Ukrainian clubs is needed from Fifa."

Ukraine's top league was initially suspended and then terminated on 27 April because of the ongoing war.