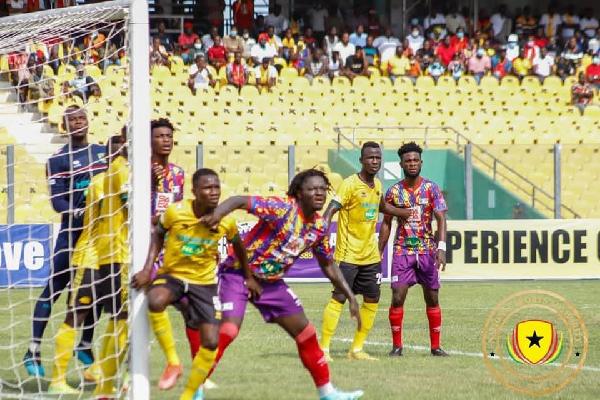 The biggest match in Ghanaian club football will come off this afternoon with Asante Kotoko taking on arch rivals Hearts of Oak at the Baba Yara Stadium.

Emotions are always high and fans are passionate when the two sides meet in a competitive match.

The build up to the game has been low key especially because the two sides are yet to find their rhythm in the 2022/23 football season with Kotoko coming into this game following a shocking elimination from the CAF Champions League and MTN FA Cup champions Hearts of Oak are winless in two games.

The Porcupine Warriors last season beat the Phobians by a lone goal courtesy Franck Mbella Etouga after Fabio Gama was brought down inside the box by Abdul Aziz Nurudeen.

They will be hoping to continue from where they left off while the Accra-based team are in for revenge.

Meanwhile, Referee Selorm Yao Bless has been nominated to officiate the Super clash.

He will be assisted by Patrick Papala and Tijani Mohammed with Musah Mubarak expected to be the fourth referee.

Adam Mukaila will be the Match Commissioner while Nathaniel Gyasi has been nominated as the venue Media Officer.

Bless was the same man who handled the game between the two sides at the Accra Stadium last season which ended in a goalless draw.

After the game he won the admiration of many including the FA president, Kurt Okraku following his level of officiating.