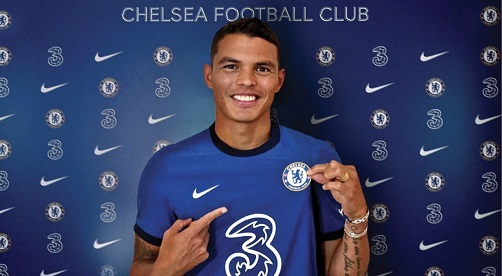 Former Paris Saint-Germain defender Thiago Silva has joined Chelsea on a one-year contract, with the club having the option of a further 12 months, the London based-club has announced.

The centre back signed for the London club after ending his stay with the French giants following the expiration of his contract after the 2019/20 season ended.

READ ALSO: I feared for my life during arrest in Greece - Harry Maguire

Looking ahead to his new challenge, Thiago Silva said: ‘I am so happy to be joining Chelsea. I am delighted to be a part of Frank Lampard’s exciting squad for next season and I’m here to challenge for honours. See you soon Chelsea fans, I look forward to playing at Stamford Bridge very soon.’

Chelsea director Marina Granovskaia said: ‘We are delighted to be able to add a player of Thiago Silva’s proven world-class credentials to our squad.

‘Having performed at the highest level for many years, we have no doubt his experience and quality will complement the many exciting talents we already have here.

‘Thiago will be an excellent fit and we hope he can add some new trophies to his impressive list of honours.’