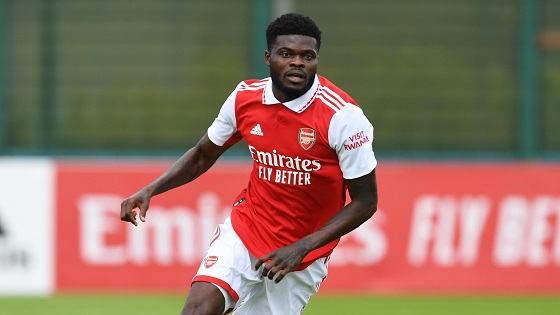 Thomas Partey will remain in London when Mikel Arteta's squad jet off for their pre-season tour of America on Wednesday.

Partey, 29, did not travel to Germany for the Gunners' 5-3 win over Nurnberg on Friday, one week after he returned from a thigh injury to take part in a friendly against Ipswich.

According to The Times, the Ghanaian midfielder has been omitted from their US tour and will instead remain at London Colney along with Bernd Leno and Folarin Balogun, where the trio will step up their fitness ahead of the new campaign.

Arsenal's first Stateside outing comes on Sunday against Everton in Baltimore, Maryland, before friendlies against Orlando City and Chelsea in Orlando, Florida, over the next six days.

They will then return home for a final pre-season fixture against Sevilla in the Emirates Cup on July 30.

Partey will be keen to rebuild his match fitness in the weeks leading up to the 2022-23 campaign, having missed the final two months of the previous one due to injury.