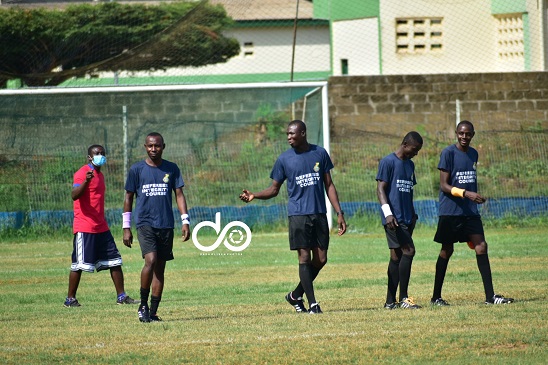 Referee Gabriel O. Arhin and Assistant Referee Peter Dawsa have been suspended for the rest of the 2020/21 football season and the first eight matches of the first round of next season.

The GFA Match Review Panel announced this decision after reviewing the video recording of the Ghana Premier League Week 19 match between Ashantigold SC and Hearts of Oak played at the Len Clay Stadium in Obuasi.

Below are the decisions taken by the Review panel at its last meeting:

After watching the video, the Panel observed that the goalkeeper blatantly moved off the goal line in between the goal post before the kicker kicked the ball.

It was also observed that the penalty awarded should not have been a penalty because the ball hit the playerâ€™s hip before touching the hand, per the law under handball, it is not an offence if the ball touched a playerâ€™sÂ hand/armÂ directly from the players ownÂ head orÂ body: including the foot.

The Panel therefore recommend that Referee Gabriel O. Arhin and Assistant Referee Peter Dawsa be suspended from all football activities for the rest of the 2020/21 football and half of next seasonâ€™s first round (i.e eight (8) matches of next football season).

According to Star Madrid FC at about 55 minute into the match, Star Madrid player Eric Tuffour in jersey number 18 was elbowed in the face - an incident that ended him in the hospital with disfigured face. He sustained a fracture, the referee failed to caution Achiken FCâ€™s players

They also made the following claims that in the 85thÂ minute, a questionable foul was awarded to Achiken FC which gave them the equalizer. Also, Star Madrid stated that Achikenâ€™s Â goal scored in the 89thÂ minute is also questionable from the angle the goal was scored.

Star Madrid further stated that player Richard McCarthy in jersey number 23 was brought down in Achiken's 18 yard box but the referee rather awarded a foul against them in the 92nd minute and in the 95thÂ minute a handball in Achiken FCâ€™s 18 box through a re-bound but the referee and his assistant two overlooked it and ignored the penalty.

After watching the video of the match, the Match Review panel observed the following:

The officials are exonerated and commended for their good decisions.