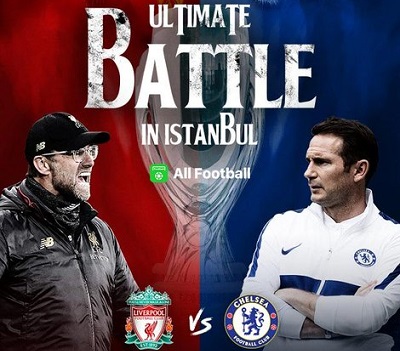 Chelsea and Liverpool will be battling for the bragging rights as the duo clash off in the UEFA Super Cup in Istanbul.

Frank Lampard who has been on the losing side twice as a Chelsea player in Super Cup finals [against Atletico Madrid in 2012 and Bayern Munich in 2013] and will be looking to be third lucky as a manager.

His reign as Chelsea boss got off to a disappointing start on Sunday, with the Blues slipping to a heavy 4-0 defeat to Manchester United in their Premier League opener and will be hoping his troops put the disappointing defeat against them to cause an upset in today's encounter.

Jurgen Klopp, on the other hand, will be having a shot at the European title for the first time be it as manager or player. Liverpool who achieved a historic a feat when they won the Champions League in 2005 at the same venue (Istanbul) will be seeking for another miracle tonight.

The two teams got off to this stage by winning their respective European titles last season. Liverpool beat Tottenham 2-0 at the Wanda Metropolitano Stadium on June 1 to clinch the Champions League whilst Chelsea thump London rivals Arsenal 4-1 in Baku to win the Europa League.

Ahead of today's clash, Chelsea is likely to be without the services of midfielder Ngolo Kante who picked up a knock in the defeat to Manchester United whilst Liverpool's safe pair of hands Alisson Becker will miss the game due to an injury he picked up in the Premier League over the weekend.

Meanwhile, Uefa has named French Stéphanie Frappart as the centre referee for the Super Cup, making her become the first female official to referee a major men's UEFA match.