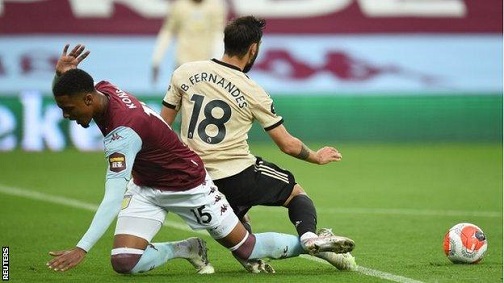 Incorrect penalty decisions were made by the video assistant referee in all three of Thursday's games, the Premier League has told BBC Match of the Day.

Bruno Fernandes won a spot-kick which he scored in Manchester United's 3-0 win over Aston Villa.

James Ward-Prowse hit the bar after a disputed penalty as Southampton drew 1-1 with Everton.

And Tottenham should have had a penalty for a Joshua King shove on Harry Kane in a 0-0 draw with Bournemouth.

The Premier League confirmed United and Southampton should not have been given penalties, but Tottenham should have been awarded one.

Former Everton midfielder Tim Cahill, a Match of the Day pundit, said a former player should be involved to work alongside the VAR officials at Stockley Park.

"I think that would really help them, to understand the movements," the former Australia international said.

"When a player falls to buy a penalty you can feel it. It must need a player there to give advice on what the player is doing.

"They're there to make the big decisions and they can't do it. It's really disappointing."

Fifa is taking over direct responsibility of VAR from football rulemakers IFAB and is expected to insist on greater consistency across more than 100 global leagues, on issues such as the use of pitchside monitors.

There has been confusion in the Premier League, with referees' chief Mike Riley limiting the use of monitors to not slow the game down.

1. Mourinho: 'Powerful people do not like to be criticised' 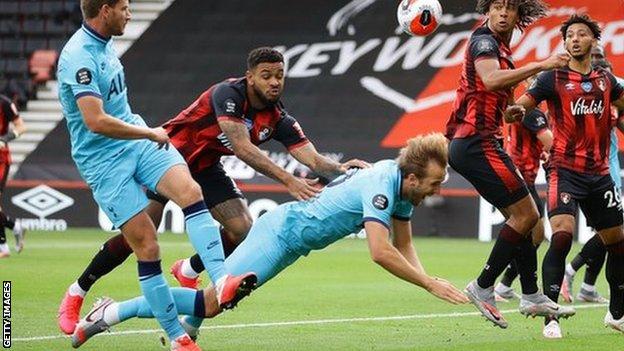 Tottenham manager Jose Mourinho said "everyone in the world" thought his side should have had a penalty, apart from video assistant referee Michael Oliver.

King pushed Kane in the back as he defended a cross but referee Paul Tierney did not award a penalty and Oliver chose not to intervene.

Oliver, who will referee Sunday's north London derby against Arsenal, was also the VAR official when Kane had a goal ruled out in Spurs' 3-1 defeat by Sheffield United last week.

"The game had the most important moment - you know when, you know who," said the Spurs boss.

Mourinho told BBC MOTD he feels "powerful people do not like to be criticised".

Asked to clarify who he was referring to, Mourinho told Sky Sports: "The same referee that was the VAR against Sheffield United. In the world, everybody knows that is a penalty. And I say everybody, I mean everybody.

"Like Sheffield, the man of the match was not one of the players. But at Sheffield I could blame myself and the players, today I could not do that."

BBC Match of the Day pundit Dion Dublin said: "It's clear because Harry is setting himself ready to head that ball and he gets fouled. It is a penalty." 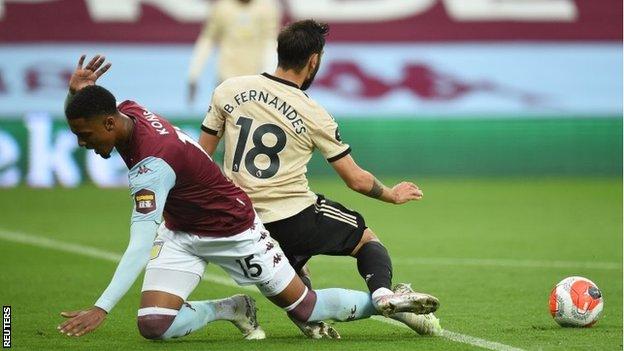 Moments after Trezeguet hit the post for Villa, United won a penalty which Fernandes converted to set them on their way to a 3-0 win.

The Portuguese pirouetted on the ball and appeared to catch Villa defender Ezri Konsa's leg - but referee Jon Moss awarded a penalty, a decision supported by VAR.

Fernandes scored from the spot to set United on their way to victory and leave Villa four points from safety.

The Premier League match centre told Match of the Day: "It was the wrong decision. It should have been overturned by VAR but wasn't and should actually have been a foul on Konsa."

"I can understand Jon [Moss, referee] getting it wrong but I don't know what VAR are looking at," he said. "They have a screen they can go and look at it but they don't seem to be bothered.

"Fernandes is trying a double drag-back - his first touch is on the ball, his second touch is on Ezri Konsa's shin."

"I think it's a penalty. The boy sticks out his leg, Fernandes does a fantastic Zidane, Maradona turn and he lands on him," he said.

Dublin, who played for both clubs, said: "It's clearly, in our opinion, not a penalty.

"Anybody who has played the game knows what Fernandes is trying to do. He does the turn and he gets it wrong. He puts his stud on Konsa's shin. It changed the game.

"VAR is there to say has the referee made an error and they didn't think he had. That might cost Villa millions."

Cahill said: "It's a big mistake. I feel for Aston Villa. This totally goes against them. VAR needs to step in and it needs to protect the players as well." 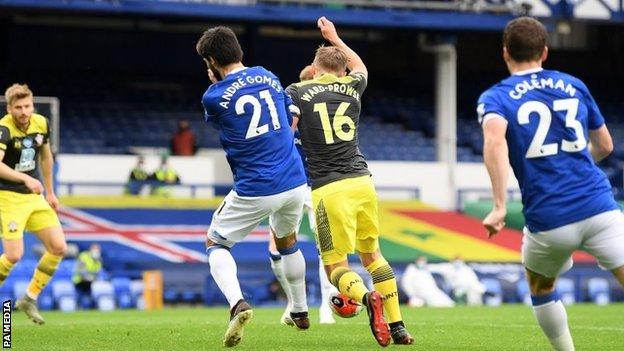 The Premier League also confirmed Southampton should not have had a penalty against Everton.

Ward-Prowse appeared to fall into the standing Andre Gomes, although he missed the penalty as he hit the crossbar.

"The performance of the referee was like my team, not so good," said Everton boss Carlo Ancelotti.