Video: Jordan Ayew's Crystal Palace touch down in Singapore ahead of Liverpool test 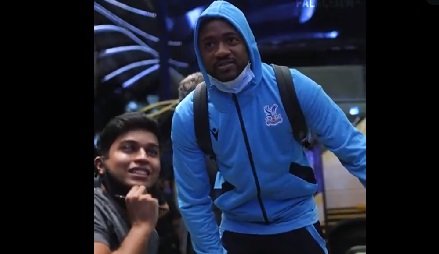 Ghana forward Jordan Ayew was part of the Crystal Palace squad that touched in Singapore ahead of their pre-season game against Liverpool on Friday.

Ayew, Patrick Vieira, Joachim Andersen, Joel Ward and others were greeted by fans at the airport before the nation’s media welcomed them to their hotel.

Fans of all ages flocked to see the Premier League arrive in Singapore, with one lucky fan getting the squad's signatures on his shirt.

The 30-year-old was included in the 26 squad on tour for matches against Liverpool in Singapore (15 July), Manchester United in Melbourne (19 July) and Leeds United in Perth (22 July).

The former Swansea City and Aston Villa forward has struggled to find the back of the net and dominated the headlines for the wrong reasons last season where he scored three goals in 31 appearances.

However, he has began the pre-season a good note by scoring on his return to action in Crystal Palace’s 5-4 victory over Millwall.

Jordan Ayew has 18 goals in 79 international caps for the Black Stars of Ghana.

He is expected to start for the manager, Patrick Vieira when Crystal Palace opens next season’s English Premier League campaign at home to Arsenal in August.

Jordan is expected to make Ghana's squad for the 2022 World Cup scheduled to be hosted in Qatar later this year.

What a welcome for the squad 🥰#CPFC | #Tour2022 pic.twitter.com/nRCvh6QWuV