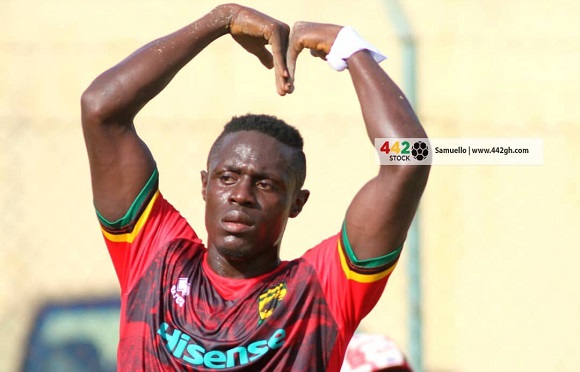 Asante Kotoko have picked their third win of the season after seeing off Liberty Professionals 2-0 in the last fixture for Ghana Premier League matchday 8.

Kotoko in recent years, have dominated this fixture with 13 wins, six draws and five defeats in 24 meetings and at the Accra Sports Stadium on Monday showed their dominance again as they eased past Liberty Professionals.

Porcupines duo Kwame Poku and Brazilian import Fabio Gama proved to be a thorn in the flesh of the Scientific Soccer lads as they formed a partnership on the day against coach David Ocloo's sides.

Kotoko started the game on the front foot and nearly found the opener when Kwame Poku set up Christopher Nettey against the Liberty goalkeeper Kofi Baah with a flick to Razak Abalora's long pass, but the defender's lobby failed to hit the target.

Moments later the Reds finally broke the virginity of the game courtesy Kwame Opoku in the 10th minute. The former Nkoranza Warriors goal poacher latched on to Emmanuel Sarkodie's pass inside the penalty box, and made room for himself before shooting into the net.

Poku and Gama combined to double Kotoko's lead in the 19th minute.

The 21-year-old striker was put through by Fabio Gama and he showed brilliant composure inside the box to double their advantage with the goal being his 5th of the season.

Kwame Opoku grabs an early brace to give Kotoko their 2nd goal. The assist from Fabio Gama though.

Coach Johnson Smith charges went into the break with a 2-0 lead. Both teams failed to score in the second department of the game as referee Clement Kwame Nkuah brought proceedings to an end at the Accra Sports Stadium.

Kotoko are now joint 5th with Hearts of Oak on the league log with 12 points following the win.