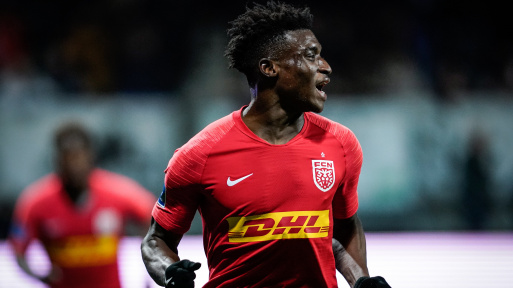 Mohammed Kudus scored a brace as Nordsjaelland cruised to a 4-0 win over Aalborg in Saturday's Danish Superliga fixture.

The 19-year-old winger found the back of the net twice within seven minutes in the second half to stretch his tally to 11 goals after 23 games in the Danish top-flight this season.

A first-half brace from Mikkel Damsgaard fired the visitors ahead at Aalborg Portland Park before Kudus added to the goals in the 51st and 57th minutes.

Five Ghanaian stars were in action for Nordsjaelland with only Kudus playing for the duration of the encounter.

Ibrahim Sadiq and Isaac Atanga also started for Flemming Pedersen's side but they were replaced in the 69th and 70th minutes, with Sadiq providing the assist for the opening goal before his substitution.

Abdul Mumin and Kamal Sulemana came on as second-half substitutes for the visitors while Uganda midfielder Robert Kakeeto played some minutes for Aalborg.

Following the win, Nordsjaelland climbed to fourth on the Superliga standings as they chase a spot in Europe next season.

They have gathered 45 points from 29 matches so far, a point above fifth-place Brondby who they host for their next league fixture on June 28.

Kudus arrived in Denmark in 2018 after developing his game at Right to Dream Academy in Ghana.

He has settled in well with the Wild Tigers, scoring 14 goals in 49 league games since his arrival.