Videos: Medeama rally from behind to beat Kotoko to go top 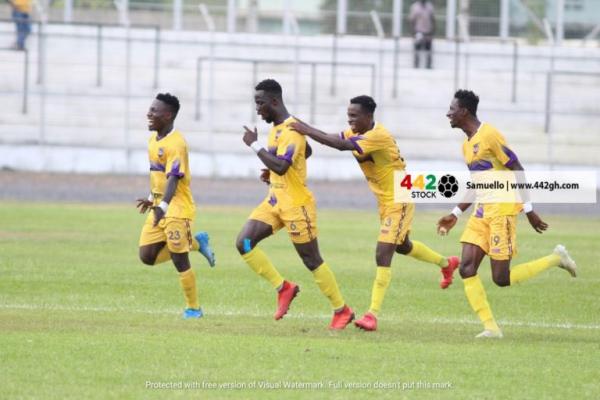 Medeama SC on Saturday came from beat to put Asante Kotoko to the sword to climb to the summit of the Ghana Premier League.

The Tarkwa based side beat the Kumasi-based side 2-1 in the matchday 21 fixture at the Obuasi Len Clay Stadium.

The Obuasi Len Clay Stadium is now the adopted home ground for the Porcupine following the renovation works ongoing at the Baba Yara Sports Stadium.

The Porcupines were hoping to revenge the 1-0 defeat suffered against the same opponent in the first round but their effort was not enough on Saturday.

The defeat means Kotoko's 100% record ( two wins ) at the Len Clay stadium have been broken.

It was Kotoko who drew the first blood on Saturday but Medeama uplifted their game after the goal to win the match.Â

Emmanuel Gyamfi put the Porcupines ahead after meeting Ibrahim Imoro's cross in the 13th minute.Â

Emmanuel Gyamfi heads the Porcupine Warriors into the lead.

However, the Mauve and Yellows, struck twice to overturn the deficit.

First, Prince Opoku Agyemang drew his side level after being teed up by captain Joseph Tetteh Zutah before Richard Boadu scored on the stroke of half time which was enough to carry the day for his outfit.

Kotoko's midfield was nonexistent in the first half as Medeama dominated the game.Â

The win has taken Medeama to the top of the league with 36 points after 21 games. Kotoko trail them by a point.