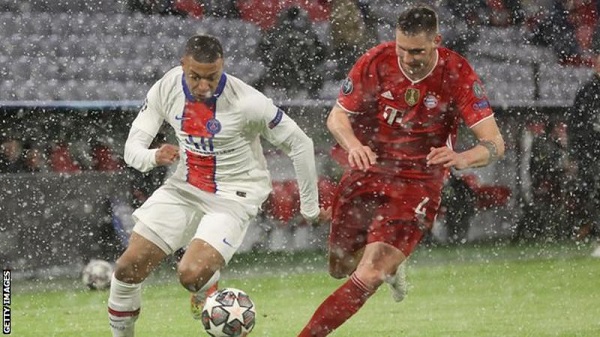 Kylian Mbappe (left) has scored 33 goals in 39 games for PSG this season, including twice in last week's first leg
Shares

Bayern Munich manager Hansi Flick says his side need to cause a "mini upset" if they are to progress past Paris St-Germain and reach the Champions League semi-finals.

It means they have to score at least two goals at Parc des Princes if they are to reach the last four.

"It will be a tough task, but these are the games we play for," said Flick.

"We want to cause a mini upset in Paris. Of course, we'll be delighted if we manage that."

Flick says his players need to be more clinical against the French champions after they only scored twice from 31 attempts in last week's first leg in Germany.

"We had many chances but we were not as decisive as we should have been and we have to improve," he said. "We will do everything we can and approach the game with optimism

"We have to make sure we show the same ambition PSG showed against us. We have to force them into making mistakes. We know we have to score at least two goals."

Bayern will still be without top-scorer Robert Lewandowski despite the Poland striker resuming training after a knee injury suffered on international duty last month.

Winger Serge Gnabry is also absent after he tested positive for Covid-19, but Leon Goretzka, Lucas Hernandez, Jerome Boateng and Kingsley Coman have shaken off knocks and should be fit.

Paris St-Germain boss Mauricio Pochettino has warned his side they need to learn the lessons from the previous round, when they won 4-1 at Barcelona in the last-16 first leg before struggling at times in the return game that eventually ended 1-1

"I agree that we've been better away from home," said the former Tottenham boss. "It is something we will have to look into at the end of the season but let's hope things start turning around tomorrow.

"It doesn't matter who is playing. It's a question of collective attitude. It's a challenge, being able to keep the ball and hurt the opposition.

"The Barca game is behind us and the Bayern game is another story. There will be moments when we will struggle and it's in these moments that we will need to show solidarity and solidity."

PSG will be without captain Marquinhos after the defender suffered a leg muscle injury in the first leg.