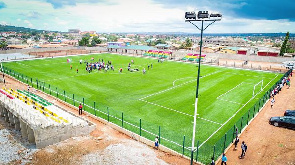 “We will spearhead the astronomical increase in sports infrastructure, particularly safer surface for footballers (Artificial Football Park) by using world-class technology to construct these parks,’’ he said.

He has also declared zero, “Sakora Parks’’, a term used to describe undeveloped football and other recreational parks in the country.

Such a move, he said, was in line with President Nana Addo Dankwa Akufo-Addo’s agenda of developing Zongos and inner cities.

He made this known in an interview with the Daily Graphic in his seasonal greetings to stakeholders in sports and the general public.

Mr Coleman said it was unfortunate that many footballers in the country failed to achieve their full potential due to the poor state of pitches in the country.

“This is one of the reasons why interest in sporting activities is dwindling. As a country, we must, therefore, embrace and propagate for a facelift in existing football parks,’’ he said.

He further called on metropolitan, municipal and district chief executives, Members of Parliaments, ministers and other policymakers to embrace the work of WSCCL in order to boost sports in the country.

“These parks can also serve as a means of raising revenue for other developmental projects,’’ he added.

Wembley Sports Construction Limited, experts in turf construction and management, this year constructed a park known as, “Lord’s Wembley Plus” at Sukura, a Zongo community in the Ablekuma Central Constituency.

It also won a contract last year from the government to develop similar parks for some Zongo communities across the country.

Read also: The highs and lows of Ghana's Black Stars in 2018 (Video)

As part of its objective of extending sports infrastructure across the country, WSCCL also gives training to selected youths in the Zongo communities by way of transferring the technology and also acquiring knowledge in maintaining artificial grass.