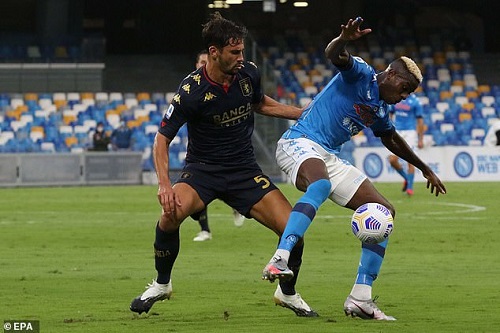 The Italian government are reportedly in talks over what action to take following the latest outbreak of Covid-19 - with a two-week suspension under consideration.

Genoa were beaten 6-0 by Napoli on Sunday and subsequently returned 14 positive tests.

According to La Repubblica, Napoli players will also now need to isolate until they have returned a negative test.

Genoa are set to face Torino on Saturday while Napoli are due to take on Juventus on Sunday.

Corriere della Sera report that the government are in dialogue with the ministry of sport as they decide on how to combat the the virus.

And one of the options being discussed is a two-week suspension of the league, which would only disrupt one round of fixtures due to the international break.

Genoa's hammering by Napoli was delayed by several hours after it first emerged that goalkeeper Mattia Perin had tested positive on Saturday.

Danish midfielder Lasse Schone was also confirmed to have returned a positive test, before a total of 14 were revealed following the full-time whistle.

Genoa said in a statement: "After today's tests, the number of COVID-19 positive employees has risen to 14 team members and staff.

"The club has activated all the procedures according to the protocol and informed the authorities. The club will provide updates as the situation evolves."

Genoa also confirmed they will push to have their next game postponed - regardless of whether the rest of Serie A continues.

"I think we will ask for the postponement,' said sporting director Daniele Faggiano. "We can’t train."