Wimbledon: Casper Ruud loses, Novak Djokovic through to third round 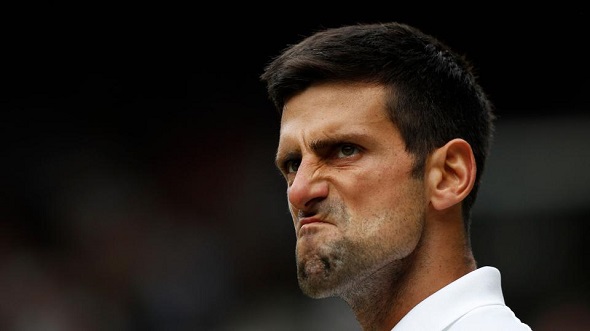 Third seed Casper Ruud was stunned by Frenchman Ugo Humbert in the Wimbledon second round, while defending champion Novak Djokovic advanced with ease.

Norway's Ruud, runner-up at the French Open earlier this month, was beaten 3-6 6-2 7-5 6-4 by Humbert, who arrived on court without a racquet.

Three of the vital pieces of tennis equipment were soon brought to court two and Humbert put them to good use.

The 35-year-old Serb is aiming to win a fourth successive title at SW19, where he is a six-time winner.

The vastly superior Djokovic was in fine form against the Australian world number 79 on Centre Court and will play compatriot Miomir Kecmanovic next.

The crowd were able to see the funny side as, after a significant rain delay, play on court two was further delayed while Humbert waited for a racquet to arrive.

The Frenchman acknowledged with a grin as three were presented to him - but the 24-year-old's smile was even broader two and a half hours later, when he reached the third round at Wimbledon for just the second time.

Ruud, 23, became the first Norwegian player to record a singles win at Wimbledon since 1965 in defeating Spaniard Albert Ramos-Vinolas in the first round.

But the Roland Garros finalist, who lost to his idol Rafael Nadal in Paris, saw his tournament ended despite taking the first set against an opponent ranked 106 places below him.

Next up for Humbert, who sealed victory with a hold to love after breaking for 5-4 in the fourth set, is Belgian David Goffin.

No trouble for dominant Djokovic

Kokkinakis made a promising start as he claimed the opening point of the match on title-favourite Djokovic's serve with a delicate touch over the net.

But any hint of an upset was quickly dismissed by Djokovic, who initially struggled for rhythm in his first-round match against Kwon Soon-woo before coming through in four sets.

Following that match, Djokovic said the possibility of not being allowed to contest another Grand Slam for 11 months because of his vaccination status was serving as "motivation" at Wimbledon this year.

In a dominant display, the former world number one consolidated an early break of serve to take a 3-0 lead - and he put the first set beyond doubt as he struck again before serving out the first set to love.

Djokovic clinched another early break in the second to once again put Kokkinakis on the back foot, his versatility around the court - including some spectacular net-play - leaving the improved Australian with no answer despite his best attempts.

There was to be no let-up, as a break of serve at the start of the third set, reinforced with another for a 4-1 lead, helped polish off a commanding win - despite Kokkinakis reaching a first break point in the final game.

Alcaraz, who has soared up the rankings on the back of runs to the quarter-finals of the US and French Opens, remains on course for a last-16 meeting with 20-year-old 10th seed Jannik Sinner after the Italian overcame Sweden's Mikael Ymer 6-4 6-3 5-7 6-2.

However there was success for Opelka's compatriot Francis Tiafoe who saw off Germany's Maximilian Marterer 6-2 6-2 7-6 (7-3).

And finally, Alejandro Davidovich Fokina was match point down at 9-7 in the final set tie-break against Jiri Vesely and hit the ball out of court, was penalised a point by umpire Carlos Ramos for ball abuse and lost the match.