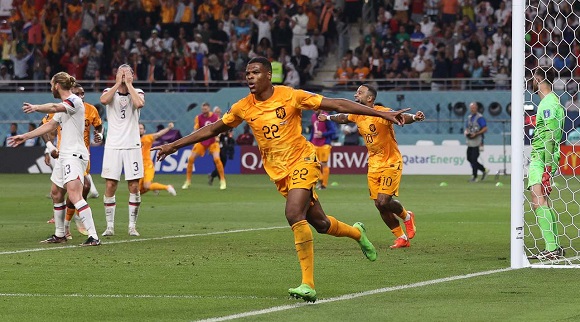 Denzel Dumfries scored and provided two assists as he fired the Netherlands into the quarter-finals of the 2022 World Cup in a 3-1 victory against the United States.

The USA started the match well, with a lot of energy to blitz the Dutch. Christian Pulisic had an early chance in the second minute after Tyler Adams flicked a ball over the top, but the Chelsea forward’s shot prompted a fantastic save from Andries Noppert with his foot.

The goal came against the run of play after some well-worked build-up from the Dutch. The ball ended up with Dumfries who was able to pull the ball back for Memphis Depay, who sent a first-time shot into the back of the net.

From then on, the Netherlands took control of the match, as the USA struggled to impose themselves in midfield. The Dutch were happy to slow the game down to suit their own pace. Just as the US started to look more threatening at the end of the half, the Netherlands doubled their lead, with an almost carbon copy of their first goal.

Dumfries was once again instrumental as his low pass into the box was towards Daley Blind, who managed to shake off Sergino Dest and fire a shot home.

The second half saw the USA try to get back into it, and nine minutes after coming on, Haji Wright flicked in a remarkable accidental looping goal with his back heel. After the deficit was cut to one, the US had a newfound energy about them and continued to push the Dutch in search for an equaliser.

However, their momentum did not last long, as Dumfries, who found himself completely unmarked at the far post, received a cross and volleyed home the Netherlands' third goal in the 81st minute.

The USA's tournament is now over, having only scored three goals in four matches, and they will hope that the sport will continue to develop in their country in time for 2026, when they will host the tournament alongside Canada and Mexico.

The Netherlands will play the winner of the match against Argentina and Australia later on Saturday.