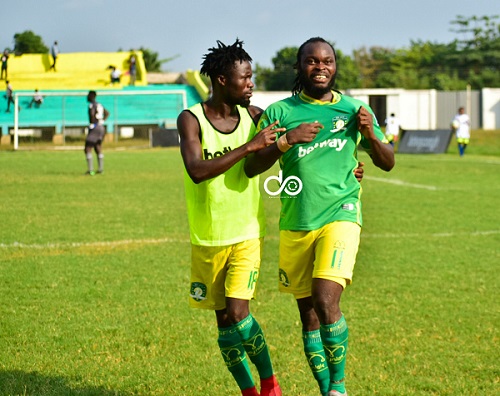 Yahaya Mohammed put up a good display as Aduana Stars eased past Hearts of Oak on Wednesday, December 16, 2020 in an outstanding Ghana Premier League fixture.

The Ogya Boys beat the Phobians 2-0 at the Nana Agyemang Badu Park with strikes from Yahaya Mohammed and Prince Acquah either side of the half to walk away with the maximum points.

Ahead of the clash Aduana Stars marksman, Yahaya Mohammed delivered a warning to Hearts of Oak but Accra based club didn't pay attention to his caution.

Speaking in an interview he promised to score and aid his side to victory, and truly the bulky kept his promise.

"Aduana has already won and I'll score. Obeng Junior can't score, he is just bragging. You will hear the news after 5pm today" he said.

The two sides and struggled to break down each other until the 40th minute when Yahaya Mohammed found the breakthrough which is his 2nd goal of the season.

Yahaya Mohammed with his 2nd goal of the season:@AduanaStarsFc 1@HeartsOfOakGH 0 pic.twitter.com/l5P6FBHcip

Aduana Stars doubled their advantage four minutes into the second half to make it a difficult task for Kosta Papic's side. The Ogya boys held unto their lead until the referee brought proceedings to an end at the Nana Agyemang Badu Park in Dormaa.

The victory means the two-time League Champions has picked their first win of the season after drawing against King Faisal (1-1), Bechem United (0-0) and Techiman Eleven Wonders (1-1). They also lost 1-0 to Elmina Sharks on matchday four.

Meanwhile, in the regional derby played at the Obuasi Len Clay Stadium, AshantiGold made light meal of King Faisal as they thrashed the visitors 5-1.

Kwame Peprah got the consolation for King Faisal.