For most of the last 157 years, the great bell known as Big Ben has sounded the hour in London, its reassuring and sonorous gong pealing out over the Thames, part of the sonic landscape of the city.

24 die in Pakistan after ingesting sweets mixed with pesticide

Twenty-four people, many of them from a single family, have died after ingesting sweets that had been mixed with pesticide, Pakistani officials said Monday.

The number of people killed in a powerful earthquake that struck Ecuador over the weekend has risen to about 350, the government has said.

Â The government of North Korea has banned the use of piercings and 'Western clothing' like jeans in the country.

The former US Navy SEAL who claims to have fired the shots that killed Osama bin Laden has been arrested for drunk driving.

US President Barack Obama has said failing to prepare for the aftermath of the ousting of Libyan leader Col Muammar Gaddafi was the worst mistake of his presidency.

Bernie Sanders has officially won Wyoming in a blowout, meaning the Vermont senator has now won 8 of the last 9 contests.

Wyoming is just the latest of a series of wins in the West, having already won Colorado, Utah, Idaho, Washington, Hawaii, Alaska, and possibly flipping Nevada, assuming his county delegates come to the state Democratic convention in May. According to the Sanders campaign, Bernie Sanders hasÂ cut Clintonâ€™s delegate leadÂ by 101 since March 15.

Turnout was larger than expected, according to Twitter users on the ground. One photo posted showed bleacher rows full of seats marked for Bernie Sanders, with just a small handful of Hillary Clinton supporters in the adjacent bleachers. Another photo of a caucus at a hockey rink also showed Sanders supporters outnumbering Clinton supporters 2-1:

Wyoming was already seen as friendly territory to Sanders, whoÂ only campaigned once in the stateby holding his Wisconsin victory rally in Laramie, where approximately 3,000 supporters attended. While Wyoming may be the least populated state in the US, itâ€™s pivotal in the Democratic primary, as Wyoming Democrats have picked the eventual nomineeÂ nearly 89 percent of the time.

Sandersâ€™ hot streak adds to the momentum building for his campaign leading up to delegate-rich New York, where 291 total delegates are at play. Both Clinton and SandersÂ will meet next ThursdayÂ for a debate in Brooklyn, where Sanders grew up and where Clintonâ€™s campaign headquarters is located. Following the debate,Â Sanders will travel to the VaticanÂ to discuss economic justice and environmental sustainability with Pope Francis. Hillary Clinton will hold aÂ fundraiser in Hong KongÂ with Gary Gensler, a former Goldman Sachs partner who serves as her campaignâ€™s Chief Financial Officer.

Four of six men arrested on Friday over last month's attacks in Brussels have been charged with terror offences.

The four include key suspect Mohamed Abrini, who was also wanted in connection with the attacks in Paris that killed 130 people last November.

The prosecutors could not confirm whether Abrini was the "man in the hat", the third bomber seen in a video clip in the Brussels airport attacks.

The attacks on the airport and a metro station left 32 people dead.

Officials believe those who carried out the Brussels and the Paris attacks were part of the same network backed by so-called Islamic State.

Abrini, 31, had previously not been directly linked to the Brussels bombings. His fingerprints and DNA were found in two "safe houses" in Brussels, as well as in a car used during the Paris attacks, investigators say.

Besides Abrini, those charged on Saturday were named as Osama K, Herve BN, and Bilal EM.

They are all accused of "participating in terrorist acts'' linked to the Brussels bombings. Two other people arrested on Friday have been released.

Osama K - identified in media reports as Swedish national Osama Krayem - was the man seen with the suicide bomber at Malbeek metro station just before the attack on 22 March, investigators say.

They also say that he bought bags used by the two bombers who struck at Zaventem airport on the same day.

Osama K is believed to have entered Greece from Syria with migrants last year, using a fake Syrian passport. Prosecutors believe he was driven from Germany to Belgium by Paris attacks suspect Salah Abdeslam in October.

Abrini, a Belgian national of Moroccan origin, is thought to have been filmed at a petrol station with Abdeslam two days before the attacks in Paris.

Herve BM, described as a Rwandan national, and Bilal EM are both suspected of having offered assistance to Abrini and Osama K.

Also on Saturday, heavily armed police carried out a search in the Etterbeek area of Brussels. The target was a flat which police believe may have been used as a safe house by the militants.

Pope Francis Weighs In On Love, Sex and Marriage

Pope Francis has issued hotly-anticipated new guidelines on the Churchâ€™s approach to family life after two years of consultations with the worldâ€™s bishops.

The 200 page much anticipated guidelines touched on many subjects. Â The following are some of the main points according to AFP:

Pope Francis is to make public the conclusions of his two Synods on the family in a document eagerly awaited by 1.3 billion Roman Catholics. 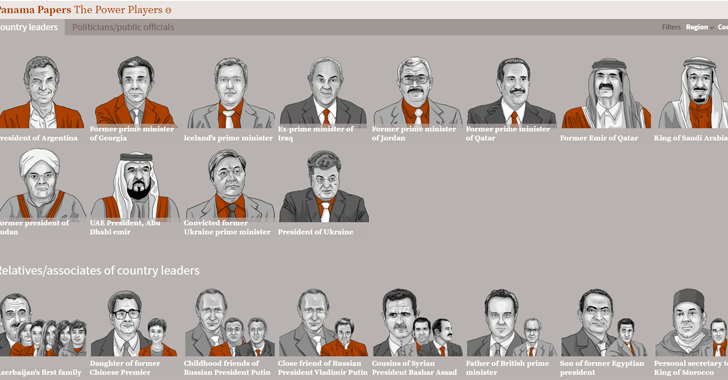 The massive leak of confidential banking documents known as the Panama Papers has implicated some big names in Africa. The documents, described as the biggest data leak in history show how 143 politicians, including 12 national leaders, have used offshore tax havens and other means to avoid taxes and sanctions.

Some of the Africans mentioned in the documents include a nephew of South African President Jacob Zuma, the twin sister of Democratic Republic of Congo President Joseph Kabila, the jailed former governor of Nigeriaâ€™s oil-rich Delta State, and the petroleum minister of Angola, Africaâ€™s second-biggest oil producer behind Nigeria.

Stanley Achonu is operations manager for Budgit, a civic organization that works to simplify the Nigerian federal budget for ordinary Nigerians. He said while the use of offshore facilities is not in itself a crime, the leak confirms what Africans have known all along about some of their leaders, that they use these offshore bank accounts to conceal stolen public funds.

James Ibori, governor of Nigeriaâ€™s oil-rich Delta State from 1999 to 2007, pleaded guilty in a London court in 2012 to conspiracy to defraud and money laundering offences. Ibori admitted using his position as governor to corruptly obtain and divert up to $75 million out of Nigeria through a network of offshore companies, although authorities alleged that the total amount he embezzled may have exceeded $250 million. Ibori received a 13-year prison sentence.

â€œThis confirms all he has said in recent months about how huge sums of money was stolen by both elected and appointed officials. I believe that this revelation will further provide evidence for the anti-corruption fight,â€ Achonu said.

Zumaâ€™s nephew -- Khulubuse Zuma -- was listed as a representative of Caprikat Limitedâ€”one of two offshore companies that allegedly acquired oilfields in Democratic Republic of Congo in a $6.8 million deal in 2010. Caprikat is registered in the British Virgin Islands, the main offshore tax haven involved in the Panama Papers.

Khulubuse Zumaâ€™s spokesperson Vuyo Mkhize said Monday that â€œKhulubuse does not, and has never held any offshore bank accountâ€ and that the Panama Papers simply suggested he was associated with Caprikat, which was a matter of public record.

The revelation could not have come at a worse time for President Jacob Zuma as South Africa's parliament is scheduled to open a debate Tuesday on an opposition motion to impeach him for violating the constitution.

The Constitutional Court ruled last week that Zuma "failed to uphold, defend, and respect the constitution" by failing to pay back some of the public funds he used to make improvements on his private home.

Zuma said in a televised address to the nation last week that he "never knowingly or deliberately set out to violate the constitution, which is the supreme law of the republic." Achonu said itâ€™s about time South Africans make a decision about what to do about their president.

â€œFor me itâ€™s not just about South Africa. Itâ€™s also about the larger role that South Africa plays in Africa, one of the biggest countries, only second to Nigeria. South Africa cannot afford to have a president who has been tainted on all sides with respect to scandals,â€ Achonu said.

The documents also mentioned Jaynet DÃ©sirÃ©e Kabila, twin sister of Democratic Republic of Congo President Joseph Kabila. She has been a member of parliament since 2012. She is allegedly linked to Keratsu Holding Limited, a company incorporated in the Pacific island of Niue in June 2001, months before her brother was elected as president. Kyungu has yet to comment on the allegations.

Achonu said while the use of offshore facilities is not in itself a crime, the leak confirms what Africans have known all along about some of their leaders, that they use these offshore bank accounts to conceal stolen public funds.

â€œI wouldn't want to reduce the data being released to just tax evasion. Especially in Africa, itâ€™s most likely a case of people who have stolen public funds which they cannot justify using their regular income based on the position they hold in government and are now trying to hid their assets and wealth through offshore companies,â€ he said.

According to Newsweek, the Swiss company Cotecna hired Kojo Annan in 1995 for work in Nigeria. By early 1998, he had quit to become a consultant to Cotecna. Months later, the United Nations awarded the firm a contract as part of Oil-for-Food humanitarian program in Iraq, prompting allegations of impropriety. An independent panel investigated the program, including Kojo Annan, and issued a report in 2005 that found no evidence that he tried to influence or to use family connections to benefit from the program.

Alaa Mubarak, the son of former Egyptian President Hosni Mubarak is also mentioned in the papers as well as Ian Stuart Kirby, president of the Court of Appeal in Botswana, and former Zambian Ambassador to the United States, Attan Shansonga.

The prime minister of Iceland has resignedÂ over theÂ Panama Papers leaks which have shed an embarrassing spotlight on the world of offshore finance.

Prophet 'Ascends' To Heaven, Sells Photos He Took While There

Wonders they say shall never end. If you think Ghana was the only place where self-proclaiming men of God gave out ridiculous prophecies and claim to have performed Â miracles that even Jesus Christ did not perform while on earth, then you must be mistaking.