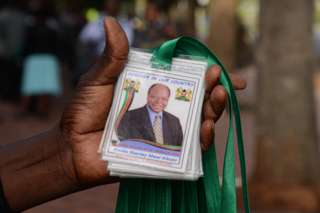 A state funeral service is being held on Friday for former Kenyan President Mwai Kibaki who died a week ago at the age of 90.

The event is being held at the Nyayo National Stadium in the capital Nairobi. Major roads in the city have been closed to facilitate movement to the venue.

Kenyans have been queuing to pay their last respects to the late president for the past several days, viewing his body at parliament where it lay in state.

The country has set aside Friday as a public holiday to allow Kenyans to mourn and attend the service.

Neighbouring Tanzania has declared two days of mourning from Friday in solidarity with Kenyans.

Mr Kibaki was sworn in as the third president of Kenya near the end of 2002, and served until 2013.

The former president will be buried on Saturday at his home in central Kenya.