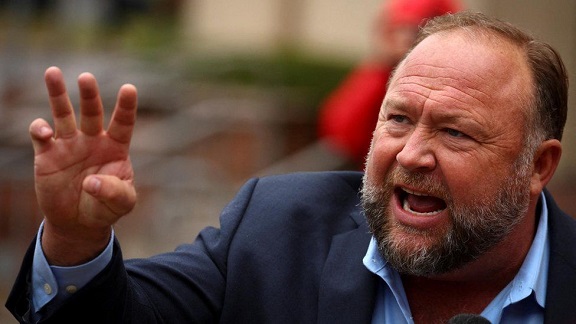 Conspiracy theorist Alex Jones has been ordered to pay $965m (£869m) in damages after falsely claiming the 2012 Sandy Hook school shooting was a hoax.

The families of eight victims, and an FBI agent who responded to the attack, had sought at least $550m in the defamation trial in Connecticut.

They alleged the right-wing radio host's misinformation led to a decade of harassment and death threats.

Jones, who founded the conspiracy-laden Infowars website and talk show, argued for years that the massacre was a "staged" government plot to take guns from Americans and that "no-one died".

He called the parents of victims "crisis actors" and argued that some of them never actually existed.

He now acknowledges the attack was "100% real", a concession he made in August at a separate defamation trial in Texas.

As the verdict was read out on Wednesday in Waterbury, Connecticut - some 20 miles (32 km) from the site of the 2012 shooting - many of the families were visibly emotional with some in tears.

The three-week trial was marked by emotional testimony from a succession of parents.

Some described receiving a deluge of online hate and others said they had to move homes repeatedly for their own safety. A father, Mark Barden, recounted hearing that people were desecrating his son Daniel's grave by "urinating on it and threatening to dig it up".

Jurors also heard evidence that Jones and his company, Free Speech Systems, made millions of dollars selling nutritional supplements, survival gear and other products on the Infowars catalogue.

Jones broadcast himself watching Wednesday's verdict and scoffing at the court proceedings. He also appealed to his followers to make urgent donations, and pledged that the funds would not go towards his legal costs.

"The money does not go to these people," he said. "It goes to fight this fraud and it goes to stabilise the company."

His lawyer Norm Pattis told reporters that they will appeal the decision.

"Candidly, from start to finish, the fix was in this case," he said outside the court.

In closing arguments, plaintiffs' attorney Chris Mattei said: "When every single one of these families were drowning in grief, Alex Jones put his foot right on top of them."

Jones, for his part, had slammed the proceedings as a "show trial" run by a "tyrant" judge and argued he was not to blame for the actions of his followers.

"I've already said I'm sorry hundreds of times, and I'm done saying I'm sorry," he said in dramatic testimony late last month that brought some in the courtroom to tears.

His lawyers urged the six-member jury to ignore political undercurrents in the case and award minimal damages.

His lead defence lawyer, Mr Pattis, also drew a stern rebuke from the judge after he accused the opposing legal team of "inventing anger".

The trial follows a similar case in Texas in August that saw Jones ordered to pay $49.3m in damages to other Sandy Hook parents.

The plaintiffs - who said they had endured harassment and emotional distress because of the Infowars founder's misinformation - had sought $150m.

A lawyer in the Connecticut case said families should receive at least $550m, saying Jones's Sandy Hook content got an estimated 550 million views from 2012 to 2018.

It said these were to cover emotional distress as well as slander and defamation. It is possible Jones will be separately told to pay punitive damages.

However, it is unclear how much money the families will actually receive, with Jones saying on Wednesday there "ain't no money".

Jones and his entourage flew to Connecticut from Texas for the trial in a private jet. They stayed in a rented villa with a pool and tennis court, according to the New York Times.

Jones still faces a third defamation trial over the Sandy Hook shooting that begins in Texas later this year.