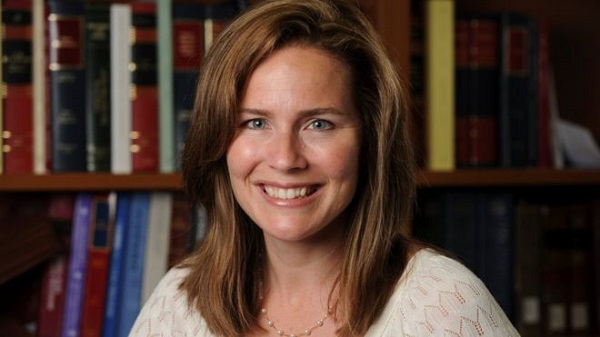 US President Donald Trump will reportedly nominate Amy Coney Barrett, a favourite of social conservatives, to be the new Supreme Court justice.

The president's decision - to be revealed at the White House on Saturday - has been confirmed to the BBC's US partner CBS News and other US media.

The nomination will touch off a bitter Senate fight to get her confirmed as November's White House election looms.

CBS - citing multiple sources involved in or familiar with the selection process - reported that the president had settled on Judge Barrett.

But when asked about his choice on Friday evening, Mr Trump refused to give anything away: "You'll find out tomorrow. Look, they're all great. It could be any of one them."

If Judge Barrett is confirmed, conservative-leaning justices will hold a 6-3 majority on America's highest court for the foreseeable future.

The 48-year-old would be the third justice appointed by this Republican president, after Neil Gorsuch in 2017 and Brett Kavanaugh in 2018.

The Supreme Court's nine justices serve lifetime appointments, and their rulings can shape public policy on everything from gun and voting rights to abortion and campaign finance long after the presidents who appoint them leave office.

In recent years, the court has expanded gay marriage to all 50 states, allowed for Mr Trump's travel ban to be put in place, and delayed a US plan to cut carbon emissions.