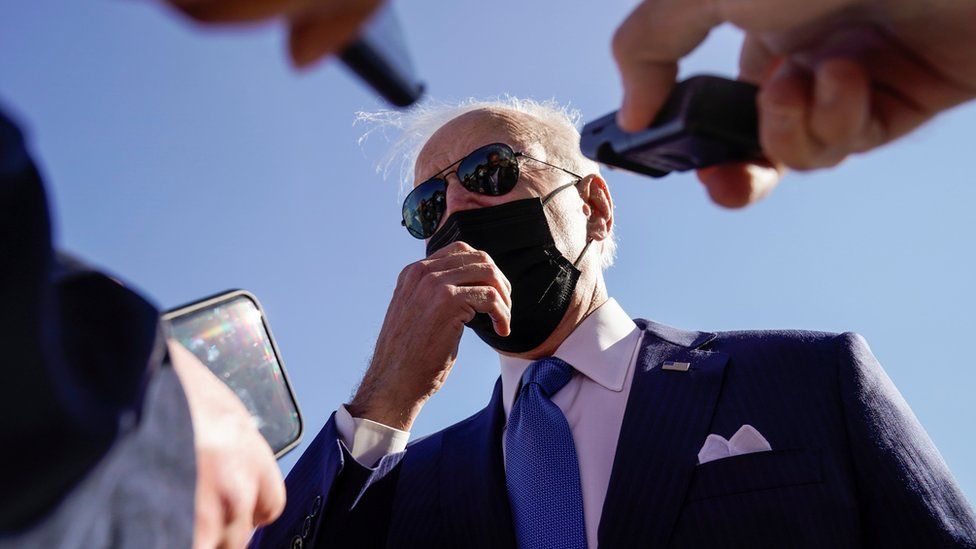 US President Joe Biden has likened a new voting law in the state of Georgia to racist policies of the 20th Century American South, calling it an atrocity.

In a strongly-worded statement, the president called it "Jim Crow in the 21st century" and "a blatant attack on the Constitution".

He later added that the justice department was "taking a look" at it.

In last year's presidential election, Mr Biden became the first Democratic candidate to win Georgia since 1992 - and it was high turnout among black Americans that was believed to have tipped the state in his favour.

The state was also at the heart of false claims of voter fraud during the 2020 election.

What has President Biden said?
"Recount after recount and court case after court case upheld the integrity and outcome of a clearly free, fair, and secure democratic process," Mr Biden said in the statement, released on Friday.

Describing the new law he said: "This is Jim Crow in the 21st Century. It must end."

Jim Crow refers to the 19th and 20th Century laws that enforced racial segregation in the US South.

Among the restrictions are new voter identification requirements for absentee ballots, and a limit on the use of ballot drop boxes that make it easier to vote.

The law also makes it a crime to give food and water to people queuing to vote.

"Instead of celebrating the rights of all Georgians to vote or winning campaigns on the merits of their ideas, Republicans in the state instead rushed through an un-American law to deny people the right to vote," Mr Biden's statement continued.

"This law, like so many others being pursued by Republicans in statehouses across the country is a blatant attack on the Constitution and good conscience."

Why Georgia?
Former president Donald Trump repeatedly pressured elected officials in Georgia to investigate his unsubstantiated claims that the 2020 election had been stolen from him.

Then in January, Democrats took control of the US Senate when Georgia Republicans lost two run-off races.

Despite those Democratic wins, the state's government is controlled by the Republicans.

Republicans introduced the Election Integrity Act of 2021, and it passed in both chambers of the state's Republican-controlled legislature within the space of a few hours on Thursday.

It makes Georgia the first presidential battleground state and the second overall to pass laws that restrict ballot access in the aftermath of the 2020 election.

Earlier on Friday, a Democratic state lawmaker was arrested and charged while protesting against the bill.

Park Cannon was handcuffed and removed from the state capitol for banging on Governor Brian Kemp's office door as he signed the bill.

According to her arrest warrant, Ms Cannon "knowingly and intentionally" kept knocking on the door despite repeated warnings, and stomped on her apprehending officer's foot with her heels.

In a statement on Facebook, the lawmaker said she "will not stand by while our voting rights are threatened" and pledged to "continue this fight".

Ms Cannon is among those who have slammed the measures in Georgia as "Jim Crow in new clothes".

"Georgia will take another step toward ensuring our elections are secure, accessible and fair," Governor Kemp told reporters while signing the bill.

Several demonstrators rallied at the state capitol as he signed the new legislation in a closed-door session.

What does the new law do?
It adds new ID requirements for requesting mail-in ballots, replacing the current system which simply requires a signature.

Republicans say this will instil greater confidence in election integrity, but Democrats say it will now be harder for working class people - who may not have an ID - to cast a ballot.
It expands early voting access in most counties.

A previous version of the bill that curbed weekend voting prompted an outcry, with Democrats arguing it targeted the Sunday voting drives held by black churches.
It gives the state legislature greater power over the state election board.

Democrats say the move would allow votes in certain counties to be thrown out, which Mr Trump advocated for after his loss.
It bans the practice of giving food or water to voters in line.

The Republican bill labels it a method of soliciting votes, but several media reports suggest that voters, particularly in majority black parts of the state, have often had to wait in line for hours.
It shortens the period for runoff elections.

It will go from nine weeks to four weeks - shortening the time for early and mail in voting. Democrats say that is in an attempt to suppress votes after an energised voter base in Georgia sent two Democrats to the US Senate this year. Republicans say it will more fairly reflect voters' beliefs at the time of the initial vote.

The first fight in a national battle
Georgia is among the first states to pass some form of overhaul to voting rules, with Iowa being the first earlier this month.

But it won't be the last. There are currently 253 similar bills in 43 states, according to the left-leaning Brennan Center for Justice think tank.

That's because, while Democrats currently hold slim majorities in both chambers of the US Congress, Republicans dominate statehouses across the country.

Data from the National Conference of State Legislatures shows Republicans have legislative control in 30 states and unified control - including the governorship - in 23 states, far more than Democrats.

Unified control means that what happened in Georgia - where a law quickly passes both chambers and gets signed by the governor - can easily be replicated.