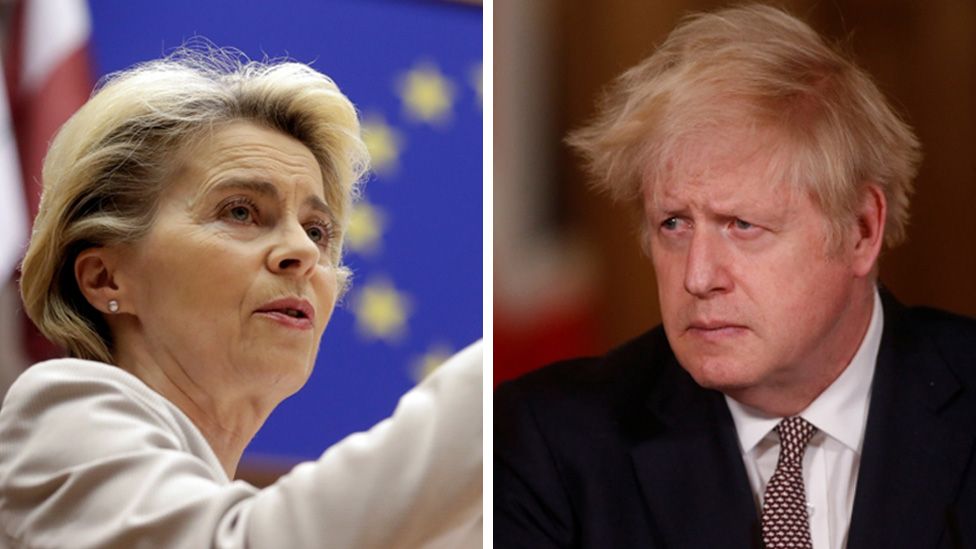 Boris Johnson and European Commission President Ursula Von Der Leyen will seek to break the stalemate over a post-Brexit trade deal on Saturday.

Negotiators for the two sides called in the two leaders after saying "significant divergences" remained following a week of intensive talks.

Time is running out to get a deal through before the UK leaves EU trading rules on 31 December.

Most of the deal has been completed but key sticking points remain.

These include fishing rights, the rules governing state subsidies for business and how the agreement is policed.

One source close to the negotiations on the UK side suggested there had been a more optimistic outlook earlier in the week but pointed to demands for EU fishing boats to have ten year access to UK waters as one issue that derailed progress - as had been reported in the Telegraph.

France's Europe minister suggested his country could veto a deal if they are not satisfied. French President Emmanuel Macron has been keen to ensure the fishing industry won't lose too much access to British waters.

Meanwhile the spokesman for German Chancellor Angela Merkel said "there is always room for compromise".

And Irish Prime Minister Micheál Martin said he "fervently hoped" a trade deal can be agreed.

2px presentational grey line
Analysis box by Katya Adler, Europe editor
Positive-minded readers might consider that, even if the EU-UK deal were almost agreed, the European Commission president and arguably, especially Boris Johnson, who has aligned himself so personally to "getting Brexit done", would want to put their personal stamp on things.

Confirmation that they will call each other on Saturday afternoon could therefore be seen as a "good" sign. Although sources in the EU and UK warn not to expect news of the conclusive Big Breakthrough following their chat.

Cynics might nod their head too when I say that - considering the uncomfortable political compromises both sides have to make to reach a deal - one more "crisis", aka the current stop in talks, is quite useful to demonstrate to the public back home that you're hanging on in there, fighting for their interests.

That's certainly the way to interpret France's threat to use its veto if a deal is agreed, and it doesn't like it.

Emmanuel Macron has enjoyed the role of Brexit bad cop throughout. It plays well domestically. And "France the frenemy" is an easy headline in the UK too.

But reality is more nuanced. Paris trumpets more brashly what is the belief in all EU capitals, and in the UK government: Yes to this deal but not at any cost.

Releasing identical statements on Friday evening, the EU's chief negotiator Mr Barnier and his UK counterpart Lord Frost said: "After one week of intense negotiation in London, the two chief negotiators agreed today that the conditions for an agreement are not met, due to significant divergences on level playing field, governance and fisheries.

"On this basis, they agreed to pause the talks in order to brief their principals on the state of play of the negotiations."

If an agreement is reached it will need to be turned into legal text and translated into all EU languages and ratified by the European Parliament.

The UK government is likely to introduce legislation implementing parts of any deal reached which MPs will be able to vote on.

And the 27 EU national parliaments could also need to ratify an agreement - depending on the actual contents of the deal.