Coronavirus: 10,000 migrants sent back to Ethiopia 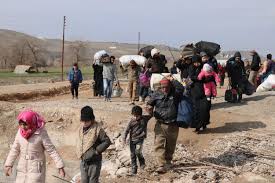 At least 10,000 undocumented migrants have returned to Ethiopia, many from the Middle East, since Covid-19 was declared a global pandemic, the UN's migration agency has told the BBC.

They were discharged from an isolation centre on Wednesday where they were being held and are expected to join their families in the coming days.

According to the International Organisation of Migration (IOM), the pandemic has had a severe impact on its efforts to secure the safe passage of migrants.

“The return has to be conducted in a manner that ensures that migrants stay healthy throughout the process. So, we’re having to implement measures that we wouldn’t ordinarily implement.

"Our position is very clear that large migratory movements across borders in a pandemic context are not advisable,” said Maureen Achieng.