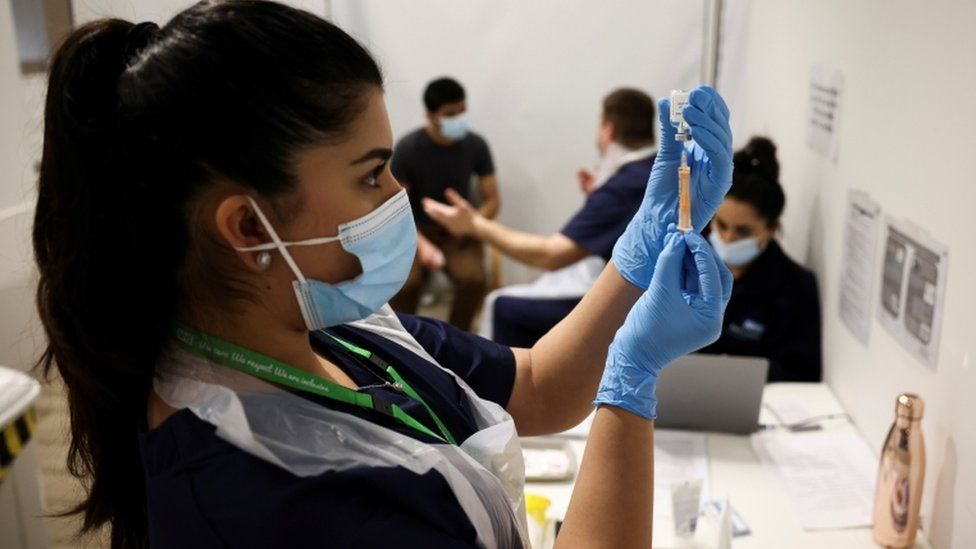 The UK should donate vaccines to developing countries now rather than waiting until it has a surplus, the new head of the World Trade Organization has told the BBC.

Ngozi Okonjo-Iweala said it was "in the interest" of wealthy countries that all nations access vaccines.

It comes after PM Boris Johnson said the UK would donate most of its surplus supply to poorer nations.

On Friday, G7 leaders pledged to intensify co-operation on Covid-19.

They agreed to increase their contribution to the Covax vaccine-sharing initiative, which is aiming to get at least 1.3 billion doses to vulnerable populations worldwide in the coming months.

Addressing the UK government's plans to donate its surplus vaccines to the developing world, Ms Okonjo-Iweala told BBC Radio 4's Today programme it was "welcome" - but cautioned against delay.

"I don't think we should wait to get surplus when other people have been served," she said. "I think that any donations that are coming must come now.

"The reason is very simple. It's in the interest of rich countries as well as poor countries to have equitable access."

The new WTO chief cited a study by the International Chamber of Commerce (ICC), which outlined the economic case for global vaccinations.

The ICC-commissioned research found that the world stood to lose as much as $9tn (£6.4tn) in GDP if, by the middle of the year, rich countries have vaccinated half their populations and poor countries have not vaccinated theirs, Ms Okonjo-Iweala said.

"Half of that cost will be borne by rich countries," she said.

"So we need to understand that it's in the self-interest of both rich and poor to have equitable access to vaccines otherwise all counties lose; all people lose."

G7 leaders said in a joint statement released after the virtual summit on Friday that they have raised their overall commitment to the Covax scheme to $7.5bn (£5.3bn).

Just 10 countries have administered 75% of all vaccinations worldwide, while 130 countries had not yet received a single dose, he said.

She encouraged manufacturing companies to issue more licenses in developing countries, so a larger volume of doses could be produced across poorer regions.