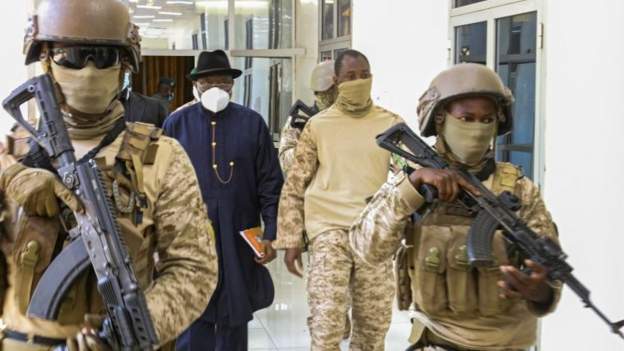 A delegation from the West African regional bloc, Ecowas, and members of Mali's military junta say they have reached agreement on several points, after a day of negotiations aimed at returning the country to civilian rule.

The negotiations are expected to continue on Monday.

"We have been able to agree on a number of points but not yet on all the discussions," Nigeria's former President Goodluck Jonathan, who is leading the mediators, said.

The military leaders have proposed a military-led transitional body to rule for three years with a mandate "to review the foundations of the Malian state", the AFP news agency reports quoting a source in the Ecowas delegation.

Ecowas has called repeatedly for Mr Keïta to be reinstated, but thousands of Malians took to the streets of the capital, Bamako, on Friday to show their support for the coup.