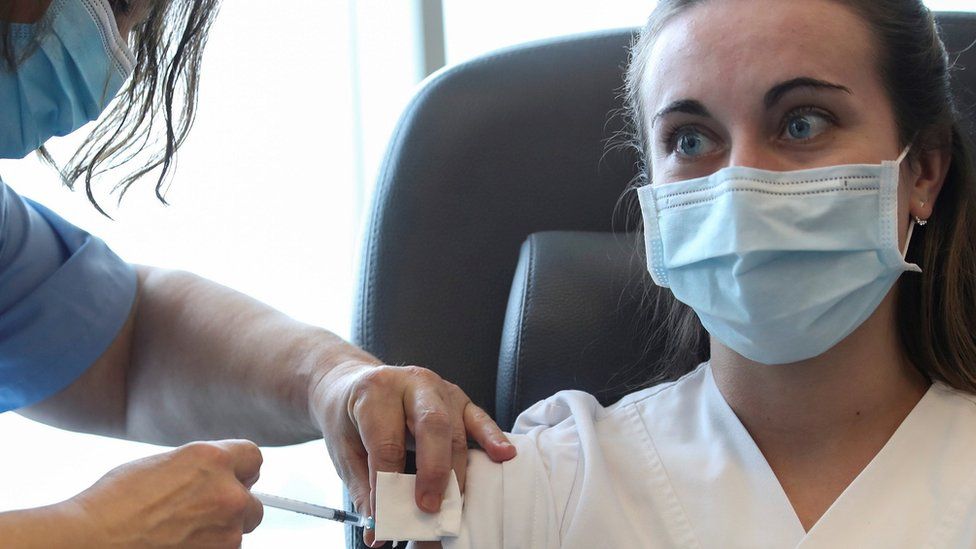 The EU has reversed its decision to temporarily override part of the Brexit deal amid an ongoing row over Covid vaccine supplies in the bloc.

The move would have seen checks at the border of Ireland and Northern Ireland to prevent shipments entering the UK.

But the European Commission later said it would ensure the Northern Ireland Protocol is "unaffected".

However, the EU said it had "no choice" but to press on with introducing export controls on vaccines.

Late on Friday evening, European Commission President Ursula von der Leyen said the UK and EU had "agreed on the principle that there should not be restrictions on the export of vaccines by companies where they are fulfilling contractual responsibilities".

She said the backtrack came after "constructive talks" with UK Prime Minister Boris Johnson in which he had expressed "grave concerns" about the initial plan.

Mr Martin welcomed the EU's reversal, describing it as a "positive development given the many challenges we face in tackling Covid-19".

However, it was not thought that the move would have directly disadvantaged Northern Ireland, which gets its vaccine supplies through the UK procurement system.

'Actions justified'
The Brexit deal guarantees an open border between the EU and Northern Ireland, with no controls on exported products.

However, Article 16 of the Northern Ireland Protocol part of the deal allows the EU and UK to chose to suspend any aspects they consider are causing "economic, societal or environmental difficulties".

The EU had announced it would trigger the clause and introduce the export controls on its vaccines entering Northern Ireland in a bid to prevent the region becoming a backdoor for jabs to be sent to the wider UK.

It said the actions were "justified" to avert problems caused by a lack of supply.

These are just some of words EU insiders have been using privately to describe the European Commission's initial decision on Friday to suspend areas of the Brexit deal dealing with Northern Ireland, a part of its Covid vaccine row.

Although it then U-turned on those plans, critics say the damage was already done.

Brussels previously lectured the UK government about respecting the Irish Protocol - which was painfully and carefully drafted during Brexit negotiations.

Now the EU seemed quick to undermine the agreement.

Member state Ireland felt stung that it hadn't been consulted. This all adds to the impression of chaos surrounding the EU's vaccine rollout.

Brussels was already under fire from a growing number of EU countries for having been slow to sign vaccine contracts with pharmaceutical companies.

This "mishap" over the Irish Protocol as Spain's Foreign Minister called it, hasn't exactly helped the commission's reputation.

2px presentational grey line
Despite backtracking on Article 16, the EU is still introducing new controls giving its member states the power to block exports of the coronavirus vaccine to countries including the UK - should they want to.

The move was the latest development in a deepening dispute over the vaccine producer AstraZeneca's delivery commitments to the EU.

The bloc agreed to buy up to 400m doses of the vaccine AstraZeneca developed last year with Oxford University, and on Friday the EU's drugs regulator approved the vaccine's use for all adults.

But the firm said that due to problems at one of its EU factories, supplies would be reduced by about 60% in the first quarter of 2021.

The statement from the European Commission said it in order to tackle "the current lack of transparency" over vaccine exports outside the EU, it would be introducing a measure requiring that all such exports "are subject to an authorisation" by member states.

While the commission rowed back from the Article 16 threat, the EU warned that it would "consider using all the instruments at its disposal" should vaccine supplies "toward third countries be abused to circumvent the effects of the authorisation system".

'Profound misjudgement'
The EU's original move was criticised by a string of politicians, with Northern Ireland's First Minister Arlene Foster describing it as "an incredible act of hostility" that places a "hard border" between Northern Ireland and the Republic of Ireland.

In a phone call earlier with the Irish Taoiseach Mr Martin on Friday evening, Mr Johnson "set out his concerns" about the move and "what these actions may mean for the two communities in Northern Ireland", according to a No 10 spokesperson.

The PM is also said to have "stressed the UK's enduring commitment" to the Good Friday agreement and called on the EU to "urgently clarify its intentions and what steps it plans to take to ensure its own commitments with regards to Northern Ireland are fully honoured".