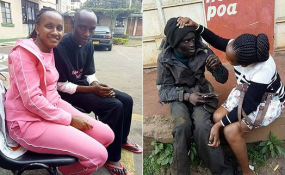 Former destitute street adult Patrick Hinga, whose rescue and transformation by a former schoolmate became an internet sensation, has passed on.

Ms Wanja Mwaura, the friend who rescued and introduced him to Kenyans, has revealed that Hinga died in a city hospital after complaining of a stomach ache.

In a Facebook post, Wanja said Hinga left home on March 14 for Kayole to visit his friends and while there he called his mother and told her that he was not feeling well but that it was not as bad.

"On Saturday late night the problem persisted and that's when he decided to go to the hospital, but by the time the mother got to him early morning (last Sunday), he had already passed on," wrote Wanja.

Read Also: How my dead friend came back to life after I prayed for her - Lady narrates

"With deep sorrow, I want to inform you that Hinga has rested. He passed on this morning (Sunday, March 17). I do not have the strength to say much right now. Rest in peace, my friend," her Facebook post read.

Hinga underwent a rehabilitation programme at the Chiromo Medical Lane Centre. He successfully completed the programme in May 2018 and the centre waived his Sh149,000 bill.

"I will update you when, where n how he will be buried. Thank you for your continued support. I need you more than ever before for this one last time," she said.

Check out some epic photo moment of them below: