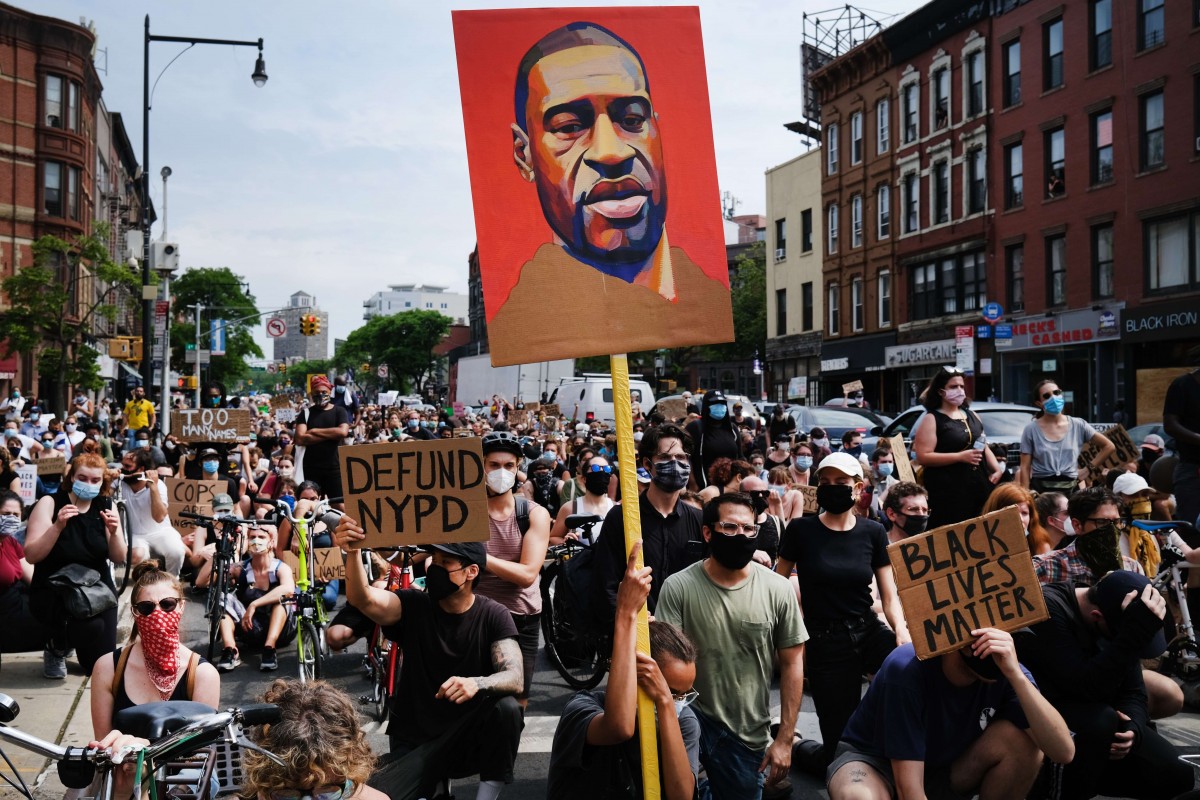 Large crowds are expected to protest in Washington DC against racism and police brutality, amid rising anger in the US sparked by the death of George Floyd.

Mr Floyd died in Minneapolis on 25 May, after a policeman knelt on his neck even as he said he could not breathe.

There have been protests nationwide since, but Washington's police chief believes Saturday's "may be one of the largest we've ever had in the city".

Anti-racism rallies have also been taking place in other countries.

Parliament Square in central London was filled with people supporting the Black Lives Matter movement, despite calls by the British government to avoid mass gatherings for fear of spreading the coronavirus.

In Australia, there were major protests in the cities of Sydney, Melbourne and Brisbane that focused on the treatment of indigenous Australians.

The policeman who knelt on Mr Floyd's neck, Derek Chauvin, has been charged with murder. Three of his colleagues have been accused of aiding and abetting.

What is planned in Washington?
Some activists have called for a million people to attend the demonstrations in the US capital.

"We have a lot of public, open source information to suggest that the event on this upcoming Saturday may be one of the largest we've ever had in the city," Metropolitan Police Department Chief Peter Newsham told journalists.

He did not provide a crowd estimate, but Army Secretary Ryan McCarthy said local officials were projecting that between 100,000 and 200,000 people would attend.

On Friday, Washington Mayor Muriel Bowser, who has clashed with President Donald Trump over his handling of the protests triggered by Mr Floyd's death, asked for the withdrawal of all federal law enforcement officers and National Guard troops from the city's streets.

In recent days, it had become apparent that their presence was "unnecessary" and "may counterproductive to ensuring the protesters remain peaceful", she said.

Ms Bowser also renamed as Black Lives Matter Plaza an area opposite the White House where federal officers fired smoke grenades to clear protesters ahead of a visit to a church by Mr Trump on Monday.

What do protesters want?
An end to police brutality is undoubtedly at the forefront of protests nationwide.

But it isn't the only concern. Repeated incidents of police brutality may have become the flashpoint, but issues with law enforcement are emblematic of the wider problem of systemic racism and inequality.

On social media and on the streets, those in support of the movement have called on elected officials to address these longstanding inequalities, from law enforcement to mass incarceration to healthcare.

Decades of government-sanctioned segregation have also seen inequalities across school systems, housing and other public resources.

As demonstrator Kyla Berges told BBC Minute: "The system has failed me for 300 plus years, so what do I have to do to make it change?"

What else is happening in the US?
A memorial service will be held in Raeford, North Carolina, near where George Floyd was born.

A public viewing of Mr Floyd's body is being held at a church, after which members of his family will gather for the service.

North Carolina Governor Roy Cooper has ordered that flags be flown at half-mast from sunrise to sunset on Saturday in Mr Floyd's honour.

On Friday, the Minneapolis City Council and the Minnesota Department of Human Rights agreed to ban police neck restraints and chokeholds.

California Governor Gavin Newsom also said he would move to end state police training in the use of the "carotid restraint".

Seattle's mayor, Carmen Best, meanwhile banned the use by police of CS gas against protesters. And a federal judge in Denver ordered police to stop the use of tear gas, plastic bullets and other non-lethal force.

In separate development, the National Football League reversed its policy on protests against racial injustice by players during the national anthem.

"We were wrong for not listening to NFL players earlier and encourage all to speak out and peacefully protest," Commissioner Roger Goodell said.