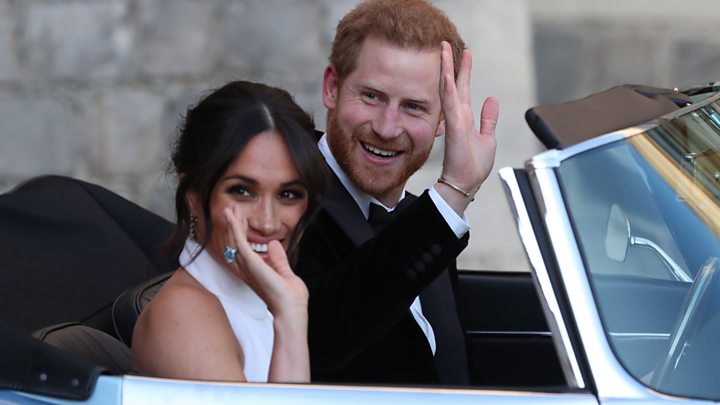 Prince Harry and Meghan will no longer use their HRH titles and will not receive public funds for royal duties, Buckingham Palace has announced.

The couple will also no longer formally represent the Queen.

The Duke and Duchess of Sussex intend to repay £2.4m of taxpayer money for the refurbishment of Frogmore Cottage, which will remain their UK family home, the statement added.

The new arrangement comes into effect in spring this year, the palace said.

The statement comes after the Queen held talks with the couple on Monday about their future, following their announcement that they wanted to "step back" as senior royals and divide their time between the UK and Canada.

The Queen said following "many months of conversations and more recent discussions" she was "pleased that together we have found a constructive and supportive way forward for my grandson and his family".

"Harry, Meghan and Archie will always be much loved members of my family," the statement continued.

She thanked them for their "dedicated work", adding that she was "particularly proud of how Meghan has so quickly become one of the family."

In a separate statement, Buckingham Palace said: "The Sussexes will not use their HRH titles as they are no longer working members of the Royal Family."

HRH, an abbreviation of His/Her Royal Highness, is used as part of the title of some members of the royal family.

BBC royal correspondent Daniela Relph told BBC Radio 5 Live: "When they first issued that statement about what they wanted, they talked about forging this progressive role within the Royal Family, about stepping back from royal duties. This isn't stepping back, it's stepping away entirely."

She said the question that will "hang over them" for the next year is what their commercial life will look like. "This will be a test of the integrity of Harry and Meghan," she said.

Buckingham Palace said the duke and duchess understood they were required to withdraw from royal duties, including official military appointments.

"While they can no longer formally represent the Queen, the Sussexes have made clear that everything they do will continue to uphold the values of Her Majesty," it said.

The statement added that the pair would continue to maintain their private patronages and associations.

Map Ives, director and founder of Rhino Conservation Botswana, said he had already been told by an official in Harry's office that the duke "wants to continue" his patronage of the organisation.

"If anything our relationship should get stronger," Mr Ives said.

There has been much speculation on who will provide security arrangements for the couple and how much it will cost, but the palace said it would not comment on such matters.

Harry and Meghan's new website, sussexroyal.com, was updated following the Queen's statement to say: "Information on the roles and work of the Duke and Duchess of Sussex will be updated on this website in due course."

The new post also invited visitors to the website to explore the site in the meantime to see the current works of "Their Royal Highnesses".

Earlier this month, Harry and Meghan said they wanted to create a "progressive new role" within the institution, where they would be financially independent and divide their time between the UK and North America.

Last year, they both spoke about the difficulties of royal life and media attention.

The duke said he feared his wife would fall victim to "the same powerful forces" that led to his mother's death.

'Harder to think of a much cleaner break'
They will always be, the Queen writes, "much loved members of my family".

But that's about it. No royal title, no royal duties, no military appointments, no tours, most of their time spent in Canada, no public money.

It is harder to think of a much cleaner break than this. Harry and Meghan are still members of the Royal Family, but they are effectively no longer royal.

The early talk was of a much more mixed life - one where perhaps Harry and Meghan continued with some royal duties, dividing their time equally between the UK and Canada.

But the contradictions and conflicts of interest were too many.

There are still lots of details to thrash out.

And the whole thing will be reviewed after a year.

But a new life awaits Harry and Meghan - celebrities, certainly, but a different kind of royalty.

A blueprint for the future?
Some questions about the couple's future status remain unanswered, including what their tax and immigration status will be in the UK and Canada.

It is not yet known whether Meghan still intends to gain British citizenship, which would entail her spending a certain amount of time in the UK.

While the couple intend to divide their time between the UK and Canada, it is expected that they will spend the majority of their time in Canada.

Former press secretary to the Queen Dicker Arbiter said the new arrangement brings a crisis for the Royal Family to an acceptable conclusion.

"It's a win-win situation. It's the best sort of deal that they could have come up with, without totally upsetting the apple cart - although Harry and Meghan made a pretty good job of that with their bombshell announcement," he said.

"It's a workable situation and it's a situation that is going to be reviewed after a year which kind of indicates that the door might be just left ajar."

But Katie Nicholl, Vanity Fair royal correspondent, said Harry and Meghan stepping away from royal duties was a loss for the institution.

She said that the agreement could also pave the way for younger royals, however.

"Prince Charles wants a slimmed-down monarchy. Maybe this is all in keeping with how the monarchy sees itself moving forward. If this works, if it's seen as a success, I think it could be a blueprint for future generations," she said.

Meghan and Harry have already begun a transition phase of living in Canada and the UK.

The move was agreed by the Queen, Prince of Wales and Duke of Cambridge.

The duchess is in the Commonwealth country with son Archie, where the Sussexes spent six weeks over the festive period.

On Tuesday she visited a charity in Vancouver which campaigns for teenage girls living in poverty.

On Thursday, the Duke of Sussex hosted the Rugby League World Cup draw at Buckingham Palace - his first public event since he and his wife said they would step back from royal life.