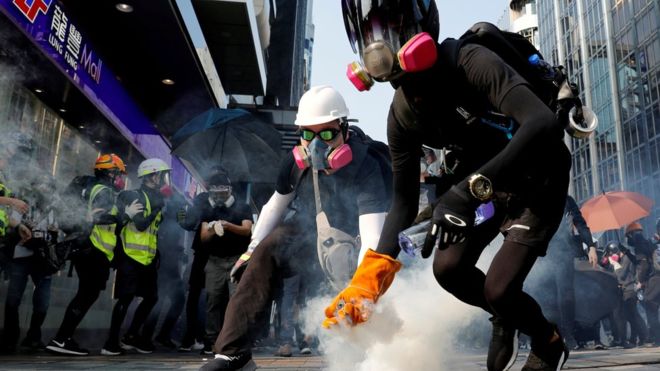 US President Donald Trump has signed into law a bill that supports pro-democracy protesters in Hong Kong.

The Human Rights and Democracy Act mandates an annual review, to check if Hong Kong has enough autonomy to justify its special status with the US.

Mr Trump said he signed the law "out of respect for President Xi [Jinping], China, and the people of Hong Kong".

China's foreign ministry said it would take "firm counter measures" - accusing the US of "sinister intentions".

Mr Trump is currently seeking a deal with China, in order to end a trade war between the two countries.

Hong Kong's government also reacted, saying the American bill would send the wrong signal and would not help to ease the situation.

But one of the leaders of the Hong Kong protest movement, Joshua Wong, said the US law was a "remarkable achievement" for "all Hongkongers".

Mr Trump had previously been non-committal about whether he would sign the bill, saying he was "with" Hong Kong but also that Mr Xi was "an incredible guy".

However, the bill had widespread congressional support, which meant that even if he vetoed it, lawmakers could potentially have voted to overturn his decision.

The president also signed a second bill, which bans the export of crowd-control munitions to the police in Hong Kong - including tear gas, rubber bullets and stun guns.

"[The bills] are being enacted in the hope that leaders and representatives of China and Hong Kong will be able to amicably settle their differences, leading to long-term peace and prosperity for all," Mr Trump said.

What does the law say?
The bill was introduced in June in the early stages of the protests in Hong Kong, and was overwhelmingly approved by the House of Representatives last month.

It says: "Hong Kong is part of China but has a largely separate legal and economic system.

"The [annual review] shall assess whether China has eroded Hong Kong's civil liberties and rule of law as protected by Hong Kong's Basic Law."

Among other things, Hong Kong's special trading status means it is not affected by US sanctions or tariffs placed on the mainland.

The bill also says the US should allow Hong Kong residents to obtain US visas, even if they have been arrested for being part of non-violent protests.

What is the situation in Hong Kong?

Hong Kong's protests started in June against a proposed law to allow extradition to mainland China but it has since transformed into a larger pro-democracy movement.

Protesters have thrown petrol bombs and attacked businesses seen as being pro-Beijing.

The protesters, meanwhile, have accused police of brutality.

On Sunday, Hong Kong held local council elections that were seen as a barometer of public opinion towards the government and the protesters.

The elections saw a landslide victory for the pro-democracy movement, with 17 of the 18 councils now controlled by pro-democracy councillors.

Police moved into the Polytechnic University campus where a handful of protesters were thought to be holding out.

The campus was the site of a siege, which turned into one of the defining moments of the anti-government protests.

Police moved in with negotiators and psychologists to convince any remaining students to leave - as well as to clear dangerous items and gather evidence.

It's not clear whether the officers found any remaining students. Over the past week, most protesters have either surrendered or escaped.