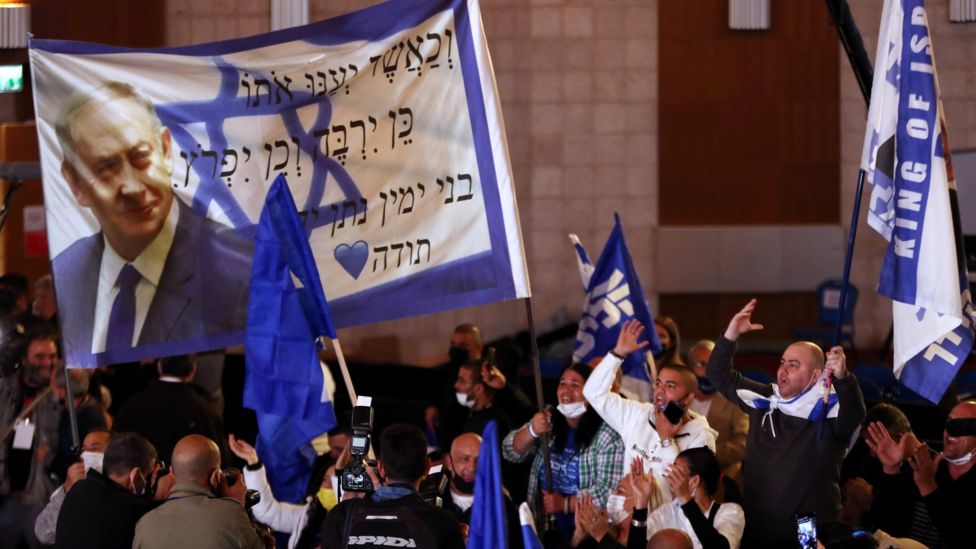 With about 90% of votes counted, his right-wing bloc is course to win 59 seats - two short of the threshold.

In a surprise development, an Arab party which is projected to win five seats could hold the balance of power.

The final outcome will among other things determine the course of Israel's relations with the Palestinians.

The Arab party, Raam, has not declared whether it will support the efforts of Mr Netanyahu - an unnatural ally - to form a government or those of the bloc opposed to him remaining in office.

Those parties have garnered 56 seats, according to the latest tally, and although backing from Raam could give them a sufficient number to form a government, they are fragmented and unlikely to be able to agree to work together.

If neither grouping can form a majority coalition, the country could face its fifth general election since April 2019. Israel's electoral system, a form of proportional representation, makes it almost impossible for a single party to win an election outright.

Based on the latest results, to stay in office Mr Netanyahu would need to secure the support of both Raam and a small right-wing nationalist party, Yamina.

Like Raam, Yamina's leader, Naftali Bennett, has not announced which side he will throw his weight behind.

"I will do only what is good for the State of Israel," he said after voting ended on Tuesday night.

He added that he had told Mr Netanyahu that Yamina would await the final results before deciding on its next steps.

Mr Netanyahu thanked his supporters in a tweet late on Tuesday. "You gave a huge win to the right and Likud under my leadership. Likud is the biggest party by far."

"It's clear most Israelis are right-wing, and want a strong, stable right-wing government," he added.

Meanwhile, the main opposition leader Yair Lapid, whose centrist Yesh Atid party is projected to win about 17 seats, said he was "proud" of his party's "enormous" achievement.

"I have already begun this evening to hold talks with some of the leaders of the bloc for change and will continue in the next few days," he said, adding that he would "do everything possible to establish a sane government in the State of Israel".

Just over 67.2% of those eligible cast their ballots in the election, which was widely seen as a referendum on Mr Netanyahu's leadership.

The 71-year-old prime minister has been in power continuously since 2009, having served an earlier three-year term in the late 1990s.

His campaign focused on Israel's world-leading Covid-19 vaccination programme and his diplomatic success in normalising ties with some Arab countries.

But his opponents from across the political spectrum argued that he should not remain in office while standing trial on corruption charges. He denies any wrongdoing.

After the previous three elections neither Mr Netanyahu nor his rivals were able to form a stable governing coalition.

The current national unity government, which was the result of a power-sharing deal with Defence Minister Benny Gantz, collapsed in December after just seven months.