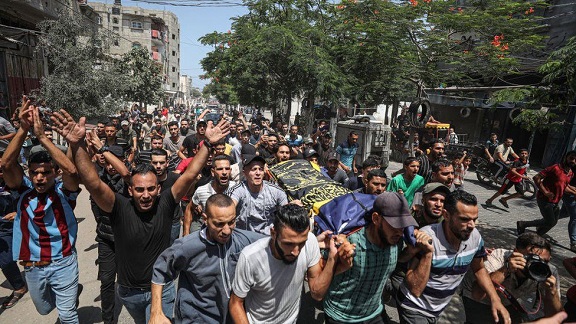 People attend the funeral ceremony of Palestinians, who lost their lives in Israel's attacks, in Rafah, Gaza on August 07, 2022
Shares

Isolated weapons fire from both sides in the minutes before and just after the Sunday night deadline failed to derail the Egypt-brokered truce.

At least 44 people have died in the most serious flare-up since an 11-day conflict in May 2021.

US and United Nations leaders urged both sides to continue to observe the ceasefire.

In a statement, US President Joe Biden praised the truce and called on all parties "to fully implement [it] and to ensure fuel and humanitarian supplies are flowing into Gaza".

He also urged reports of civilian casualties to be investigated in a timely manner.

The ceasefire was mediated by Egypt - which has acted as an intermediary between Israel and Gaza in the past - over the course of Sunday.

But as it came into effect late on Sunday, the Israeli military confirmed it was striking Palestinian Islamic Jihad (PIJ) targets in Gaza in response to rockets fired just before. Israeli media also reported some isolated rocket fire from Gaza in the minutes after the deadline.

But no further violence was reported as the night wore on.

The latest violence began with Israeli attacks on sites in the Gaza Strip, which its military said was in response to threats from a militant group. It followed days of tensions after Israel arrested a senior PIJ member in the occupied West Bank.

By Sunday evening, the Palestinian health ministry said that 15 children had been confirmed among the 44 deaths recorded in the latest violence. Gaza's health ministry has blamed "Israeli aggression" for the deaths of Palestinians and for the more than 300 people wounded.

Israel accused PIJ militants of accidentally causing at least some of the deaths inside Gaza - claiming on Saturday that the group fired a stray rocket killing multiple children in Jabalia.

Concerns over the humanitarian situation in Gaza, where health officials warned that hospitals only had enough fuel to run generators for another two days, led to the ceasefire deal being agreed.

"We appreciate the Egyptian efforts that had been exerted to end the Israeli aggression against our people," PIJ spokesman Tareq Selmi said.

Israel said that it "maintains the right to respond strongly" if the ceasefire is violated.

The latest conflict closely follows Israel's arrest of Bassem Saadi, reported to be the head of PIJ in the West Bank, a week ago.

Large crowds gathered on Sunday for the funerals of those killed in strikes on Rafah, in the south of the territory, including senior PIJ commander Khaled Mansour - the second top militant to have died. Demonstrations in support of Gaza have also been held in the West Bank city of Nablus.

It has been responsible for many attacks, including rocket fire and shootings against Israel.