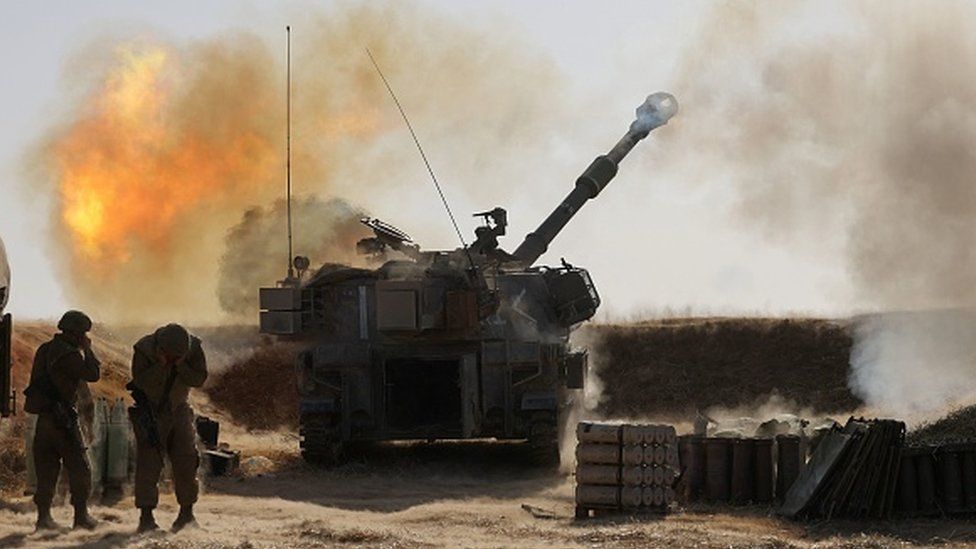 Israel has intensified its assault on Gaza, as Palestinian militants continue to fire rockets into Israel on the fifth day of hostilities.

Israel's military said air and ground forces were involved in attacks on Friday but had not entered Gaza.

Video from Gaza City showed the night sky lit up by explosions from Israeli artillery, gunboats and air strikes.

Some 119 people have been killed in Gaza and eight have died in Israel since fighting began on Monday.

Meanwhile, Jewish and Israeli-Arab mobs have been fighting within Israel, prompting its president to warn of civil war.

Defence Minister Benny Gantz ordered a "massive reinforcement" of security forces to suppress the internal unrest that has seen more than 400 people arrested.

Police say Israeli Arabs have been responsible for most of the trouble and reject the accusation that they are standing by while gangs of Jewish youths target Arab homes.

This week's violence in Gaza and Israel is the worst since 2014. It was initially fuelled by weeks of Israeli-Palestinian tension in East Jerusalem which led to clashes at a holy site revered by both Muslims and Jews. This spiralled into an incessant exchange of Palestinian rocket fire and Israeli airstrikes.

In Gaza, Palestinians fearing an incursion by Israeli troops have been fleeing areas close to the border with Israel. Residents who had left Shejaiya in Gaza City said shells had been falling on homes.

"There is a lot of shelling and the children are all afraid. Even us adults have been in war since our childhood. We are afraid and cannot bear it anymore," Um Raed al-Baghdadi told AFP.

The Israeli military said it had conducted an operation overnight to destroy a network of Hamas tunnels that it dubbed "the metro", but no troops had entered Gaza. It added that - over the course of Thursday evening and Friday morning - 220 more projectiles were fired from the Gaza Strip.

In southern Israel an 87-year-old woman died after falling on her way to a bomb shelter near Ashdod. Other areas including Ashkelon, Beersheba and Yavne were also targeted.

In a statement released early on Friday morning, Mr Netanyahu said the Israeli military operation against Palestinian militants would continue for "as long as necessary". He added that Hamas, the Islamist group that rules Gaza, would pay a heavy price, as would other "terrorist groups".

A Hamas military spokesman said the group was ready to teach Israel's military "harsh lessons" should it decide to go ahead with a ground incursion.

On Thursday, Israel's military called up 7,000 army reservists and deployed troops and tanks near its border with Gaza. It said a ground offensive into Gaza was one option being considered but a decision had yet to be made.

As fighting entered its fifth day, United Nations Secretary General AntÃ³nio Guterres called for "an immediate de-escalation and cessation of hostilities in Gaza and Israel".

His plea echoed that of other diplomats - including from Israel's ally the US - but appeals to Israeli and Palestinian leaders have so far failed to produce a ceasefire agreement.

A senior Hamas official has said the group is ready for a "reciprocal" ceasefire if the international community pressures Israel to "suppress military actions" at the disputed al-Aqsa Mosque in Jerusalem.

Gaza's health ministry said 27 children were among those killed since fighting began, and many other civilians have died. Another 600 Gazans have also been wounded.

Israel says dozens of those killed in Gaza were militants, and that some of the deaths are from misfired rockets from Gaza.

In the Israeli town of Sderot near Gaza, a young boy was killed when rocket fire hit his home and shrapnel penetrated the shelter he was hiding in.

Israel has also called up 10 reserve border patrol companies to help tackle the worst unrest between Arab and Jewish communities for many years.

What caused the violence?
The fighting between Israel and Hamas was triggered by days of escalating clashes between Palestinians and Israeli police at a holy hilltop compound in East Jerusalem.

The site is revered by both Muslims, who call it the Haram al-Sharif (Noble Sanctuary), and Jews, for whom it is known as the Temple Mount. Hamas demanded Israel remove police from there and the nearby predominantly Arab district of Sheikh Jarrah, where Palestinian families face eviction by Jewish settlers. Hamas launched rockets when its ultimatum went unheeded.

Palestinian anger had already been stoked by weeks of rising tension in East Jerusalem, inflamed by a series of confrontations with police since the start of Ramadan in mid-April.

It was further fuelled by the threatened eviction of Palestinian families from their homes in East Jerusalem by Jewish settlers and Israel's annual celebration of its capture of East Jerusalem in the 1967 Middle East war, known as Jerusalem Day.

The fate of the city, with its deep religious and national significance to both sides, lies at the heart of the decades-old Israel-Palestinian conflict. Israel in effect annexed East Jerusalem in 1980 and considers the entire city its capital, though this is not recognised by the vast majority of other countries.

Palestinians claim the eastern half of Jerusalem as the capital of a hoped-for state of their own.