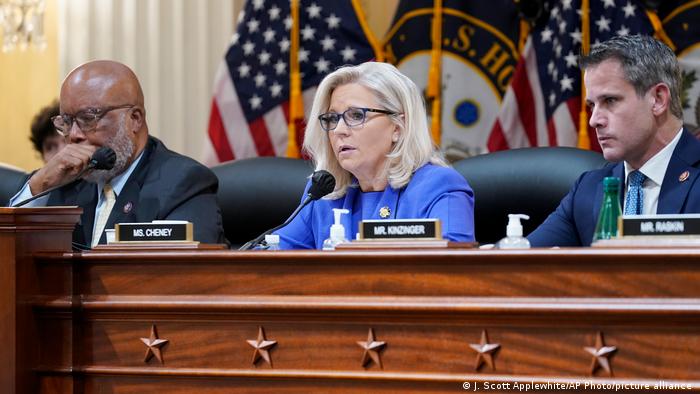 Former US President Donald Trump orchestrated last year's Capitol riot in an "attempted coup", a congressional inquiry has heard as a hearing opened into the raid.

Liz Cheney, the Republican vice-chair of the committee, said Mr Trump had "lit the flame of this attack".

After almost a year of investigation, the Democratic-led US House of Representatives select committee opened on Thursday evening by showing clips from interviews it conducted with members of Mr Trump's inner circle.

The timing was geared to reach huge evening TV audiences across the US.

Footage was aired of testimony by former US Attorney General Bill Barr saying he had repeatedly told the former president that he had lost the election and his claims of fraud were wrong.

"We can't live in a world where the incumbent administration stays in power based on its view, unsupported by specific evidence, that there was fraud in the election," said the former attorney general.

The hearing also featured a recording of testimony by Ivanka Trump, the ex-president's daughter, saying she "accepted" Mr Barr's rejection of her father's conspiracy theory.

And there was an audible gasp in the committee room as Ms Cheney read an account that claimed Mr Trump, when told the rioters were chanting for Vice President Mike Pence to be hanged for refusing to block the election results, suggested that he "deserves it".

Before the House inquiry opened on Thursday evening - the first of six hearings expected this month - Mr Trump dismissed it as a "political HOAX".

The former president has been publicly hinting about another White House run in 2024. He continues to peddle unsubstantiated claims that the last election was rigged by mass voter fraud.

The congressional committee is led by Democrats, who formed the panel after Republicans blocked attempts to set up a full independent inquiry. Just two Republicans - the staunchly anti-Trump Reps Adam Kinzinger and Liz Cheney - are taking part.

The goal of the committee is to provide a comprehensive account of not only the 6 January riot but the "coordinated, multi-step effort" to "overturn" the results of the 2020 presidential election.

Members plan to produce a report and possibly hold another hearing in September to outline their findings and offer suggestions for reforms to the US electoral process.

Mr Thompson, the committee's chairman and a Mississippi lawmaker, told the hearing: "Jan 6 was the culmination of an attempted coup, a brazen attempt, as one writer put it shortly after Jan 6, to overthrow the government.

"The violence was no accident. It was Trump's last stand."

Ms Cheney, the vice-chair of the committee and a Wyoming congresswoman, said: "Those who invaded our Capitol and battled law enforcement for hours were motivated by what President Trump had told them: that the election was stolen and that he was the rightful president.

"President Trump summoned the mob, assembled the mob and lit the flame of this attack."

Running just over two hours, the unprecedented prime-time congressional hearing on the Capitol attack was a decidedly mixed bag.

The video evidence of the 6 January events, and the dramatic personal testimony of officer Caroline Edwards, were powerful reminders of the pain and suffering that day.

The extended statement by Liz Cheney - who has put her career in jeopardy with her criticism of the former president - was full of allegations and accusations but overly dense.

An American sitting down to watch the proceedings instead of their regular Thursday night entertainment may have not received the slickly packaged production that was promised.

But if they had forgotten what it was like on 6 January - the desperation and the drama - there was plenty to remind them.

What they do with that reminder, however, remains to be seen.

Caroline Edwards, the first police officer injured in the attack, testified that she was called a "traitor" and a "dog" by the rioters before she was knocked unconscious.

She described later encountering amid the melee a "ghostly pale" Officer Brian Sicknick, who died a day following the attack after suffering two strokes.

"I was slipping in people's blood," Officer Edwards told lawmakers. "It was carnage. It was chaos."

"Never in my wildest dreams did I think that as a police officer, as a law enforcement officer, I would find myself in the middle of a battle," she added.

A British documentary filmmaker, Nick Quested, who was tracking the Proud Boys, a far-right group, on the day of the attack, also gave evidence.

He described his surprise at the anger and violence of the rampaging "insurrectionists".

Four people died on the day of the US Capitol riot: an unarmed woman shot by police and the others of natural causes.

More than 100 police officers were injured. Four other officers later died by suicide.

Republicans have dismissed the televised inquiry as a ploy to distract Americans from the political headwinds Democrats face with five months to go until the US mid-term elections.

Opinion polls suggest Democrats may lose control of the House and even potentially the Senate when the nation votes in November.

As Americans grapple with galloping inflation, soaring petrol prices and a baby-formula crisis, US President Joe Biden, a Democrat, has seen his popularity with voters dip below Mr Trump's approval rating at the same point in his tenure.

House Republican leader Kevin McCarthy - who was initially critical of Mr Trump in the aftermath of the Capitol riot, but has since shifted his tone - called the committee a "smokescreen" for Democrats to overhaul voting laws.

House Democrats impeached Mr Trump following the riot, with barely a week left in his presidency. They accused him of inciting insurrection, but he was acquitted in the Senate.